Documentary about early-1960s managers for The Who illuminates its times 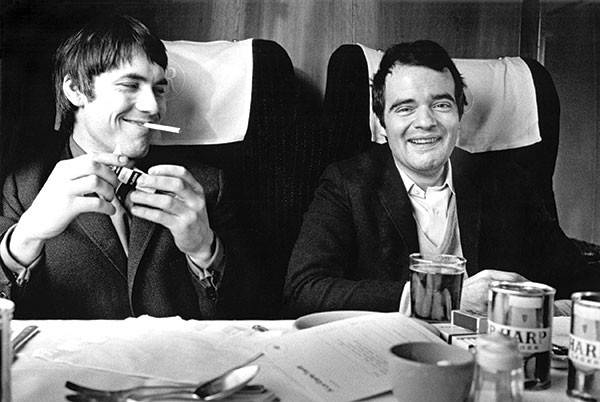 The typical rock doc spotlights frontmen, songwriters, lead guitarists. But just as The Who's musical mainspring was its madly innovative drummer, so does James D. Cooper's Lambert & Stamp view the iconic band from a novel perspective: through the sometimes-literal lens of its first managers.

"They completely and utterly, totally changed my life," says Pete Townshend. The managers were themselves an odd pair: Kit Lambert, the gay, aristo son of a classical musician, and Chris Stamp, the skirt-chasing offspring of a tugboat captain. In early-1960s London, the two budding filmmakers in their 20s bonded over French New Wave and planned to realize their cinematic ambitions by finding a wild rock 'n' roll band to manage until it was successful enough to make a film about.

The first part, anyway, worked. Lambert and Stamp (brother of actor Terence) nurtured guitarist Townshend, singer Roger Daltrey, bassist John Entwistle and drummer Keith Moon from fiery but obscure mod outfit to the rock gods who played Tommy at Woodstock. The group's long, painful split from its management began, ironically enough, with rancor over how and when to put Tommy on film.

Lambert died in 1981. Cooper builds his two-hour film around copious black-and-white archival footage — including very early concert footage of The Who and its fans — and fresh interviews with key figures: the loquacious Townshend, a reflective Daltrey, long-time band associate Richard Barnes and a still-raffish Stamp. (Stamp died in 2012, during the film's production.)

What comes through loud as a power chord is the scope of Lambert and Stamp's influence, and not just as groundbreaking businessmen and promoters. Musically, it was Stamp, for example, who suggested the signature vocal stutter in "My Generation" (because pilled-up mods stammered like mad). And Lambert, as Townshend's mentor and one-time flatmate, expanded the budding songwriter's musical palette and helped structure the album that became Tommy. The managers also kept relative peace in the infamously fractious band — for instance, getting Daltrey to stop arguing with his fists.

Cooper sets all this amid '60s England's generational and class antagonism — and indeed, alongside sweeping cultural changes as heralded by the likes of Lambert's own early independent label Track Records, which signed an unknown named Jimi Hendrix.

More than a Who fan's complement to classic doc The Kids Are All Right, Lambert & Stamp illuminates its times, and the unpredictable, idiosyncratic ways that pop life so often gets made.