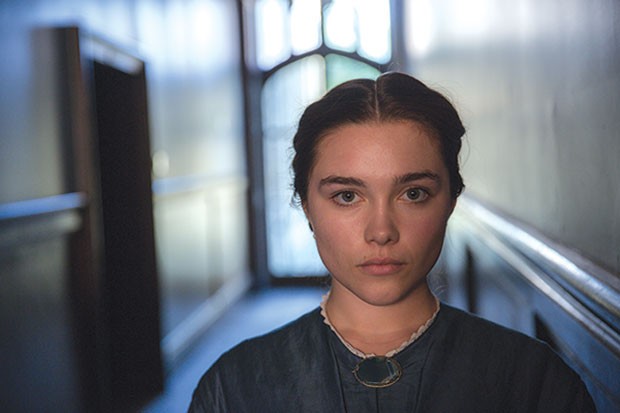 I have respect for stealth movies. Those are the ones that appear to be easygoing genre fare, but turn out to be something else entirely. That’s the case with William Oldroyd’s debut film, Lady Macbeth, which has nothing to do with Shakespeare, other than an allusion to women acting badly. The film is adapted from a 19th-century Russian novel, Lady Macbeth of the Mtsensk.

It appears to be a classic gothic romance, unfolding in an austere manor in the north of England in the 19th century. Young Katherine (Florence Pugh) has just married. “Stay inside,” her cold, much-older new husband tells her. But dressing up and sitting alone on a divan is so boring she actually falls asleep. When her husband leaves for an extended business trip, she lets down her hair and takes to the moors for long walks.

But nature isn’t the only thing to catch her eye: She begins a torrid romance with handsome stablehand Sebastian (Cosmo Jarvis). And she, let’s say, starts to take a more active role in managing the household. (Better, dear viewer, to see for yourself.)

The film begins as a domestic melodrama — the pretty bird trapped in a dark cage — and transforms into an ice-cold femme fatale noir (more than once did I recall the Barbara Stanwyck classic Double Indemnity). Katherine moves from a position of powerlessness, beginning with her arranged marriage, to controlling all the pieces on the board.

Lady Macbeth can also be read as a righteous feminist work, despite Katherine’s transgressions. It’s not as if the men here are great paragons of morality; they are variously cruel, weak or both. It’s just that the system grants them the privilege of their misdeeds. It’s a system that lady of the manor Katherine exploits herself in her unequal relationships with Sebastian and her maid, Anna, both people of color.

Some of what occurs is alarming, but given where she started — bartered in marriage for pasture land — we’re almost sympathetic. Bad behavior is still a form of agency. How ultimately successful Katherine’s machinations are is up for debate, depending what aspects of her pursuit strike one as most valuable.