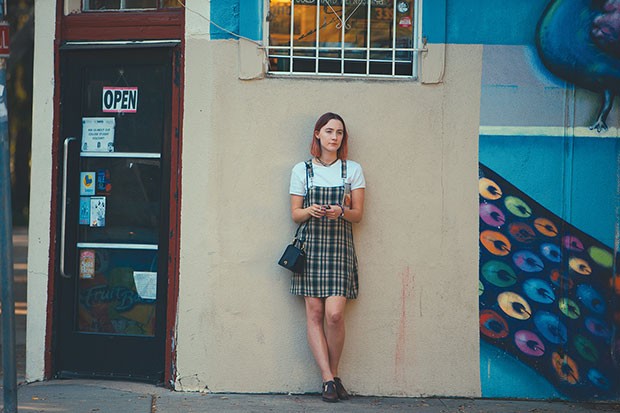 The waiting is the hardest part: Lady Bird (Saoirse Ronan)

“I wish I could live through something,” pouts Christine, a.k.a. Lady Bird (Saoirse Ronan). Being 17, she’s blissfully unaware that she is currently navigating a life-changing time, the bridge between adolescence and adulthood. For now, she’s trapped in a car with her mom, Marion (Laurie Metcalf), returning to Sacramento from a college road trip. One stray word spirals into an epic argument, complete with a greatest-hits of accusations (“You don’t think of anybody but yourself”), and one of the best “last words” ever.

Lady Bird is a marvelously funny and smart coming-of-age story, written by indie actress Greta Gerwig, who also makes her directorial debut. It’s 2002, and Lady Bird is doing OK at a tony Catholic high school (on a scholarship), but her focus is on getting out. “I want to go where culture is,” she bemoans, and for her, this is a financially unattainable college in New York City. Mom is a buzzkill: “My job is to keep you realistic.”

Over the year depicted, there is the typical retinue of activities: school play, applying for college, parties and proms, the highs and lows of dating, and singing along to bad Dave Matthews songs. Throughout, Lady Bird makes the expected good and bad choices, though this familiarity in no way diminishes the pleasures of seeing them unfold.

Lady Bird is bursting at her constraints: family, school, the backwater of Sacramento — even as they sustain her. She knows she’s right about everything — and sometimes she is — even when she is unsure; this fierce certainty is her best and worst asset. This is a film that lets its female protagonists be messy, complex, infuriating characters whom you nonetheless really root for, and Ronan and Metcalfe are fantastic in their roles.

The gods have heard my call for more films about the intense and often fraught relationships between mothers and daughters. There are many finely observed moments of this dynamic here, but I loved this scene, in which just a dozen or so exchanged words captures both the longing to connect and the utter failure of communication. In the confessional-like sanctity of the thrift-store dressing room, Lady Bird addresses her mother from behind the door: “I wish that you liked me.” Marion is stung: “Of course, I love you.” “But I want you to like me,” says Lady Bird, defeated.

The movie, a tidy 90 minutes that I wanted never to end, follows Lady Bird to college, but I was left wistful, wondering what she’s doing now 15 years later. I bet it’s grand.