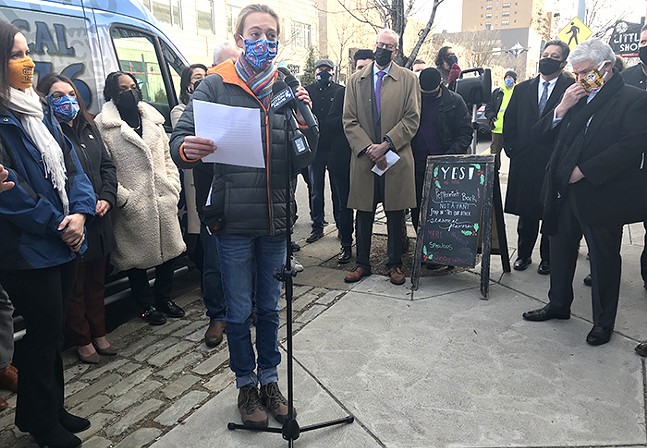 CP Photo: Ryan Deto
Liam Tinker, a worker at Coffee Tree Roasters who says he was fired for labor organizing, speaks at a rally in Squirrel Hill on Jan. 5.
On Jan. 5, more than 50 people rallied in Squirrel Hill to support the unionization efforts of baristas at Coffee Tree Roasters, a West Mifflin-based coffee chain. The crowd included labor leaders, Pittsburgh-area Democrats, and community members, all who also were calling for the rehiring of a worker they say was fired for his participation in unionization efforts.

Liam Tinker says he was fired in retaliation because he voiced his support for the union. He was fired the day after workers at the coffee chain announced their intent to unionize with the United Food and Commercial Workers Local 1776. Coffee Tree Roasters has five locations throughout the region and about 52 baristas, according to a union filing.

Tinker spoke at the rally and said he was grateful for all the support he and his co-workers have received. He said he started working at Coffee Tree in the spring of 2021 and quickly became one of the longest tenured baristas at the Squirrel Hill location. He said he was paid $9 an hour.

“Overworked and overwhelmed baristas make bad coffee,” said Tinker, who added he was fired without warning the first time he was a few minutes late. “My firing had little to do with performance, and more to do with our union organizing. Efforts to intimidate us can only increase our resolve.”

UFCW 1776 filed charges of Unfair Labor Practice last month with the National Labor Relations Board for Tinker’s firing. Under the NLRB Act, workers cannot be fired, disciplined, demoted, or penalized for labor organizing.

Coffee Tree baristas said they deserve the ability to receive tips electronically, guaranteed meal and rest breaks, paid sick time, open communication with management, and for the company’s mask mandate to go beyond just the baristas who work in the coffee shops.

Jordy Vargas, a barista at the Shadyside Coffee Tree Roasters, said that supporters have sent more than 2,000 emails to the company asking for management to recognize the union, as well as many phone calls and letters. He spoke at the rally and said that while Coffee Tree owner Jean Swoope said she was on vacation when people were pressuring Coffee Tree to support unionization, baristas later learned that she was aware of the situation.

Since the workers filed for a union on Dec. 22, baristas said that Coffee Tree has hired an anti-union law firm that has spoken with the baristas.

Coffee Tree management didn’t immediately respond to a request for comment, nor have they made any public statement about the unionization effort. 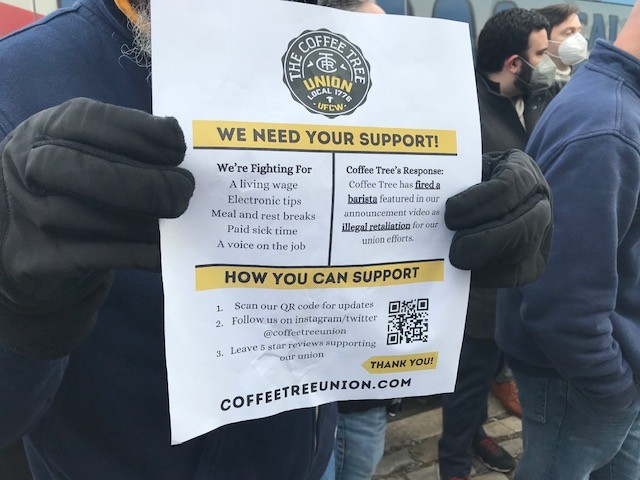 CP Photo: Ryan Deto
A flyer held up by rally attendants
Union organizers emphasized that they are not calling for a boycott of Coffee Tree Roasters. Instead, they want people to continue to support the chain, but continue to pressure management to allow unionization and to reinstate Tinker. Representatives from UFCW Local 1776, the Allegheny-Fayette Labor Council, the AFL-CIO, and several other unions were at the rally in support of the workers.

State Sen. Lindsey Williams (D-West View) spoke at the rally about her own experience facing retaliation for starting to form a union, and said that leaders will continue to support the baristas until the company recognizes the union.

“We are gonna be here until Coffee Tree Roasters rehires [Tinker] and recognizes your union,” said Williams. 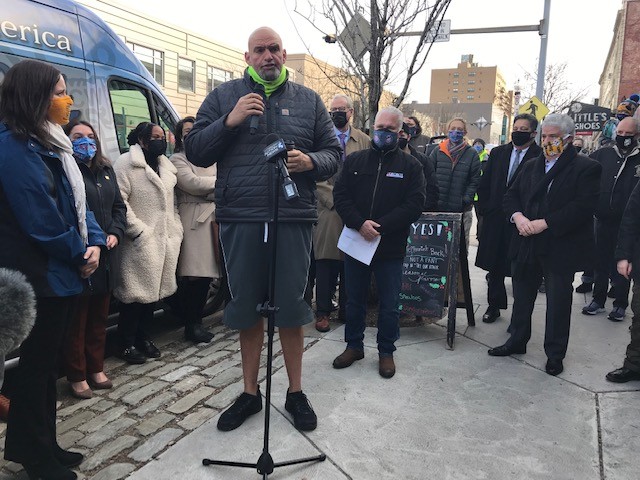 CP photo: Ryan Deto
John Fetterman speaks at the rally
Wendell Young IV, president of UFCW Local 1776, said an overwhelming number of workers signed union authorization cards, and that the NLRB has already been in touch. He said it was remarkable how fast they have responded to this case.

Pennsylvania Lt. Gov. John Fetterman (D-Braddock) also spoke at the rally and reiterated his support for the union efforts, but also reminded people that leaders are not calling for a boycott.

“You know what goes good with a cup of coffee?” said Fetterman with a Coffee Tree Roasters cup in his hand. “A union. Bottom line, this is an honor to stand in solidarity with the baristas at Coffee Tree.”