Heidi Klum excepted, Germans aren't known for their sex appeal. Austrians, even less. And Austrians in 1900? Perish the thought. What proper Viennese would risk scandal and social ostracism for a little heavy petting?

When Arthur Schnitzler wrote La Ronde at the turn of the century, the Austrian physician shocked his audiences with 11 sex scenes, served straight-up. A prostitute services a soldier, the soldier screws a housemaid, the housemaid sleeps with a young gentleman (her boss, no less!), the gent seduces a married lady, and so on. The circle-jerk ends with the same prostitute -- an unbroken chain of adultery and lust.

The Playhouse REP revives La Ronde, a play that is neither drama nor farce, but something in the middle -- a meditation on the awkwardness of sex. Time and again, men eagerly talk women into bed, and just when these women start to enjoy themselves, the men wander off. Sometimes the sex is acrobatic and satisfying; other times, it barely even happens. Either way, the act itself occurs in the dark. We watch the couples beg and resist, and then we're left with the consequences. The fun part, we soon discover, isn't the part that matters, at least not to Herr Schnitzler.

Robin Walsh directs a masterful production of La Ronde, complete with period costumes and credible Germanic formality. La Ronde is an artifact of a bygone culture, but the theme of promiscuity is timeless, and the play feels as fresh at the Playhouse as it ever will. As stilted as the language can be, Walsh's cast manages to find the sadness and desperation in their lines.

Schnitzler was a cynical playwright, and he was no stranger to bad behavior: He philandered all over Vienna, as his 8,000-page journal can attest. The characters of La Ronde are weak, sleazy and hypocritical, but they have their virtues. The count tenderly admires the prostitute as she sleeps; the dramatist renounces his famous surname. For all their power plays, everybody stays civil and polite; no one is violated.

A decadent story requires a decadent stage, and Stephenie Mayer-Staley's set design is among the cleverest I've seen all year -- patterned walls, moving antique furniture, and even a rotating platform, which is put to great use. Michael Montgomery's costumes are elegant and layered. Actors are forced to unlace boots, unfasten buttons, rip off corsets, pull away veils. Hidden beneath so much fabric, it's no wonder these Viennese yearn so feverishly.

Take away the condoms, though, and are we any better? 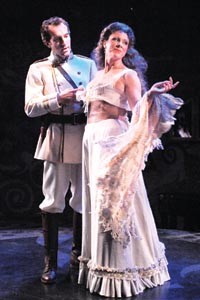 Round and round: Gregory Johnstone (left) and Gab Cody in The REP's La Ronde.