Lots of meat and traditional toppings: chopped onions, cilantro, lime and a choice of homemade salsa 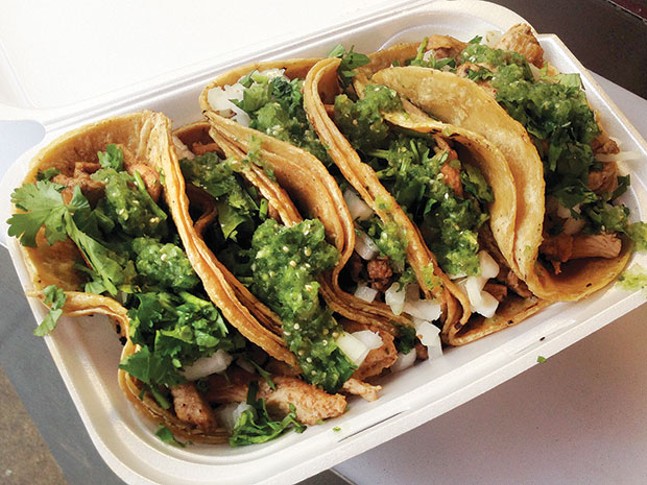 Oscar Reyes moved to Coraopolis five years ago from New York to start a roofing company. Over the years, he and his mostly Latino crew grew annoyed they couldn’t find a good place to nosh on authentic Mexican fare in the western part of Allegheny County. So, Reyes decided to open a taqueria.

“We were always looking for a place to eat, a place that is really Mexican,” says Reyes. “Now, when my guys are done working, they can come here and eat.”

In April, La Poblanita Mexican Store opened in an abandoned gas station on Fourth Avenue in Coraopolis. Reyes named the store after his hometown of Puebla, Mexico. The market is small, but includes an impressive array of Mexican products. It also has an in-house deli, where butchers make their own chorizo and prepare exotic meats like beef cheek.

But the real draw is the tacos. La Poblanita’s tacos offer seven different fillings, and Reyes likes the lomo (ribeye steak) and chicken fajitas best. Tacos are $2.50 apiece and are loaded with meat. Patrons — who purchase their tacos inside the market and then are given a ticket to relay to the cook — are encouraged to garnish their soft-corn-tortilla tacos the traditional Mexican way: chopped onions, cilantro, lime and a choice of homemade salsa.

Reyes said he wanted to keep the price of tacos reasonable so people in the area could visit for a snack, or place multiple orders for a full meal. And Reyes says the taqueria is becoming more popular each day. When City Paper visited, one customer parked his tractor-trailer on the side of the road so he could wait in line for tacos. When asked, the man replied: “Think I would have parked here like that if it wasn’t good?”

La Poblanita is open daily from 10 a.m. to 9 p.m. Arrive late at your own risk, because the more popular taco meats run out earlier in the evening.