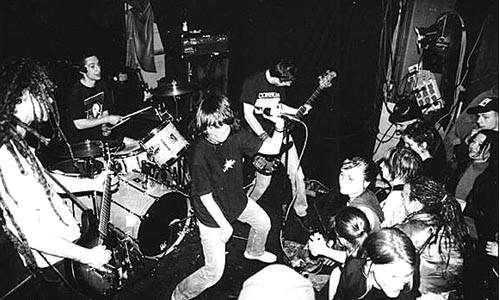 Take it to the streets: La Fraction

If music is the universal language, then punk rock functions like an unwritten slang, tattooed with different accents from every corner of the world. But no matter how you pronounce it, the subtext always reads the same. Punk is global because the world never stops inspiring revolt.

And no corner knows it better than Paris. From its royal beheadings to the riots that engulfed the city in 2005, Paris paves its streets with protest time and again. Now its storied streets are louder than ever, voiced in home-grown slang -- home-grown punk rock. Speaking up for the dispossessed, La Fraction carries France's most exhilarating voice of discontent.

The foursome tours far beyond the distribution of its three albums, and beyond its French predecessors, going where bands like Métal Urbain or Bérurier Noir feared to tread. In fact, La Fraction launches its next crusade for Paris from the streets of Pittsburgh.

Leading the crusade, an enigmatic banshee named Magali sings with a timbre of conviction that's impossible to misread. Shaking fists and tambourine, Magali sounds like a wounded nightingale as her chanson-style vocals play pinball with every note. Onstage, the four Parisians stand for all of their city's aires urbaines as they pound out furious anthems for a new tomorrow, making deaf ears ring with the sounds of civil unrest.

Just listen to the tumbling rhythms of "La Vérité" and you'll know French angst, even if you don't know French. So fuck the translation, because La Fraction is slang for one part of a whole insurgent body that's still trembling to be heard in any language.

La Fraction with Oh Shit They're Going to Kill Us!, Blood Vessels to Wires, Mass Grave and The Short Dark Strangers & the Shady Motherfuckers. 6 p.m. Thu., May 3. Belvedere's, 4096 Butler St., Lawrenceville. $5. All ages.