Kusama: Infinity gives a troubled, visionary artist her due 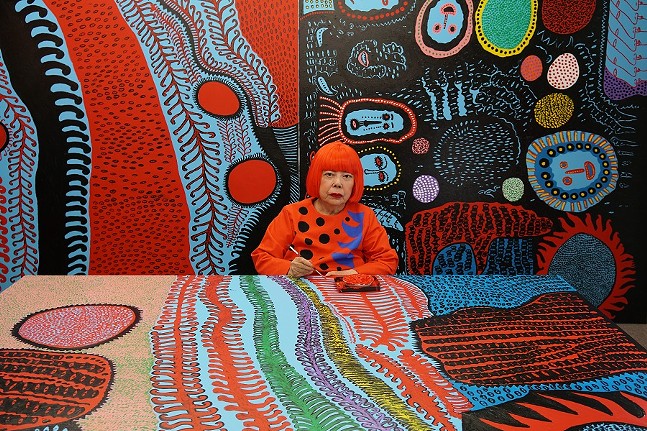 Photo: Magnolia Pictures
Kusama: Infinity
There’s something a bit startling about Yayoi Kusama. While watching the documentary Kusama: Infinity, opening at Row House Cinema on November 16, the viewer must contend with the artist’s intense, wide-eyed gaze as she stares down the camera capturing her shuffling from her current home in a Japanese psychiatric hospital to her studio a few blocks away. Despite her petite, bent-over stature, age (she’s now 89), and fragile mental state, there’s a sense that she’s still a force to be reckoned with. This is perhaps why, against all odds, she managed to secure her place in an industry that rejected her multiple times over her distinctive career.

The feature debut from director Heather Lenz uses archival materials and current interviews with the artist, as well as various curators, art dealers, and close friends, to depict its subject’s life from a dysfunctional childhood growing up in Matsumoto, Japan during and after World War II to becoming one of the world’s most successful living artists, with well-attended shows at the Tate Modern, the Centre Pompidou, and Pittsburgh’s own Mattress Factory, where she wowed art lovers with her signature dots and hypnotic “infinity net” works.

Her story gives plenty of perspective on the struggle of female artists that still persists today (the irony of her showing at the Mattress Factory, which has recently seen its own sexual abuse scandal, is not lost on us). Lenz gives careful attention to Kusama’s decades-long struggle to make it in the modernist, male-dominated New York art scene, where she endured the humiliation of having to humor the advances of contemporaries like surrealist Joseph Cornell and watched helplessly as her ideas were co-opted by more celebrated, white male artists like Andy Warhol, claiming that his famous Cow Wallpaper came from her 1963 Aggregation: One Thousand Boats Show installation. After a series of exhibitions and publicity stunts that, today, would easily make her the toast of the art world - including overseeing one of the country’s first pre-legal gay wedding ceremonies and organizing naked protest against the Vietnam War – Kusama instead returned to conservative Japan a tabloid scandal, eventually attempting suicide and ending up under a doctor’s care.


As it should be with a film like this, the most fascinating aspect is the examination of Kusama’s process, its evolution, and the psychology that drives it, a subject that, despite her stony demeanor, the artist is open about. She often returns to the trauma of being raised by an abusive mother and philandering father, who not only inspired much of her art but also the way she produces it. One interviewee observes that Kusama’s habit of working quickly and furiously – finishing giant canvases in a matter of days – comes from the panic of having a work torn away from her before it's finished, as her mother often did just that.

Despite her affinity for whimsical polka dots, bright colors, and carnivalesque light displays, Kusama’s work exudes a powerful, intentional, palpably relatable sense of feeling lost and insignificant in an ever-expanding universe. While the film makes it clear why a woman swept up in war, family drama, and an industry quick to toss her aside would project such emotions, it’s comforting to know that, despite everything, Kusama’s legacy in Japan and throughout the world will never become lost or insignificant.