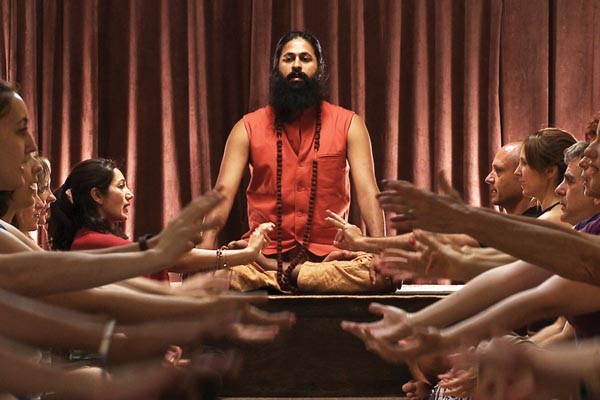 "I am not the guru": Vikram Gandhi as Kumaré

In Kumaré, a lo-fi documentary from Vikram Gandhi, the New Jersey-born filmmaker transforms himself into "Kumaré," an Indian guru, as an experiment in exploring how people seek out and adapt religion into their lives. Gandhi initially seems interested in exposing how fraudulent religious leaders convert seekers into marks, but the project shifts when Kumaré is disarmed by how immediately trusting his new acolytes are. His focus shifts to a meta-experiment in which his goal is to demystify his guru status, and encourage his followers simply to trust themselves ("the guru is not me, it is you"). But it is not until the very end of the film that Kumaré explicitly reveals himself as Gandhi, a man perpetrating a falsehood.

As viewers, we're in on the game, and thus, for me, there was an aspect of exploitation hanging over the work which couldn't be shrugged off, even as Kumaré/Gandhi has his own transformation, and the deception produces some surprising, even positive and provocative, results.

I understand Gandhi's New-Journalism desire to wear a goofy outfit and be the story. But besides the subterfuge, it seems a lazier way to examine the powerful sway of religion than making a more thoughtful and researched doc. And by documenting what is an "exotic" religion, the film risks isolating its critique to "oddball movements and the oddballs that follow them," rather than drawing broader connections to the seductive power many mainstream religions also engender. Starts Fri., Aug. 24, through Tue., Aug. 28. Melwood