Kristin Hersh of Throwing Muses and 50FOOTWAVE talks about her new solo record, near-death experiences, and finding balance in everything

“Balance just is. There isn’t anything else. Mathematically, there couldn’t be.” 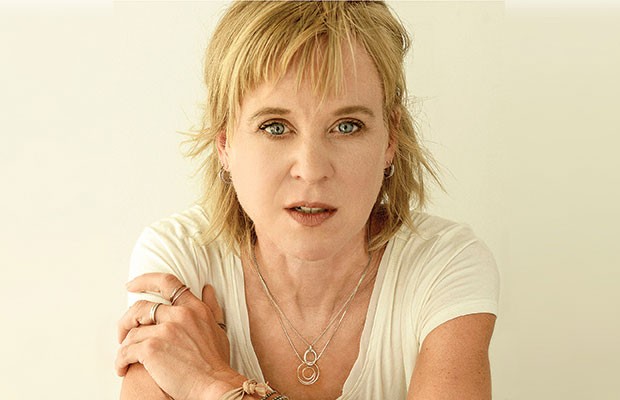 Photo courtesy of Peter Mellekas
Showing the gleam under the mess: Kristin Hersh

Musically, there are few more balanced than indie-rock icon Kristin Hersh. While she’s the co-founder of rock band Throwing Muses, she knows how to both showcase her aggressive side with power-punk trio 50FOOTWAVE, and flex her singer-songwriter muscles with her mostly acoustic solo career.

“Every song that plays through my window seems to be made of different colors, whether it’s the neighbors’ lousy record collection, a car radio, or a new song of my own,” Hersh writes via email while on tour overseas. She goes on to describe the varying sounds of her three musical outlets. “The neighbors’ record collection I’ve come to accept, but my songs come asking questions and demanding better outﬁts, so I like to give them what they ask for. Throwing Muses gets the ones that sound sweet, but tangled. They need a thin voice; the sound of broken balls, or at least fragile ones.

“50FOOTWAVE is shame as power. That voice is both meaty and ready to break. Solo, I still haven’t figured out yet. I make those records alone, no friends, just playing drums all night, racing around building instruments and breaking instruments ... But interesting, dervish-like things can happen when you start whirling. Solo records are like Cinderella at the stroke of midnight.”

Over the past five years, Hersh has been working on new solo material in between releasing Throwing Muses’ 2013 album, Purgatory/Paradise; putting out a new 50FOOTWAVE EP, Bath White, earlier this year; and publishing the critically acclaimed book Don’t Suck, Don’t Die, about her close friendship with the late singer-songwriter Vic Chesnutt.

As with her previous solo album, 2010’s Crooked, and Purgatory/Paradise, Hersh’s new solo album, Wyatt at the Coyote Palace, comes in a book/CD format that includes true stories and songs of all the life, death, dark, light, love, loss, piety and desire that Hersh has experienced over an unsettled time in her life.

“Balance just is. There isn’t anything else,” she writes. “Mathematically, there couldn’t be. When systems seem out of balance, all you have to do is wait.”

If there any one subject could upset the balance of themes on Wyatt at the Coyote Palace, it would be death. Hersh has come face to face with death on more than one occasion, and she writes about these experiences in the book. Some of these incidents were worse than others, but the underlying lesson seems to be that most people approach the idea of mortality with a mix of fear and fascination.

“I hadn’t noticed how many of [my bandmates’ and my] stories involve almost dying,” Hersh writes. “A conversation I had with a friend over sushi at the beach inspired this collection of stories. He didn’t think almost dying was as funny as we did … this turns out to be a balance thing, too — you can’t take yourself seriously [and you] can’t take life lightly.”

Death is an unsettling topic for most, but not for Hersh. She’s not afraid to spill her inner-most thoughts through her words and lyrics. But it does make one wonder how far she’ll go with her personal anecdotes.

“What the songs make me say is awfully embarrassing, but beneath shame is universal experience,” she writes. “It’s my job to show the gleam under the messes.”

Part of that mess for Hersh is playing and learning to play new instruments while recording in the studio. Hersh is probably one of the most overlooked guitar players in the business today, but she is also fluent on bass, piano and drums. On Wyatt at the Coyote Palace she takes her exploration a step further, experimenting with horns and cello, and even making her own instruments in an effort to find a sound that no one has heard before. She even sang into a garbage can full of stuffed animals to gain a certain effect.

“[Longtime friend and producer Steve] Rizzo often reaches the point of asking me what the fuck I’m doing,” she writes. “But I know exactly what I’m doing — sort of.”

Although it took five years, some pain, some healing, and some engineering, Wyatt at the Coyote Palace is one of Hersh’s best efforts since she began her solo career more than 20 years ago — a solo career she once said would never happen. And while her faithful fans might now have the book and album in hand, for the singer/songwriter, the album is never truly finished.

“I ﬁnished the ﬁnal musical edit at exactly the same time as the ﬁnal text edit,” she writes. “I can’t tell you how impossible this is. Just the odds of working on both at the same time are goofy.

“I can’t bear that this record is ﬁnished. In my head and heart, it will never be done; that way I can keep it alive. Almost like praying over water so that it doesn’t freeze, doesn’t evaporate, stays ﬂuid. Pointless and a total mind-fuck, but it works for me!”