Maybe that's what Christmas has been missing all these years: an enemy. 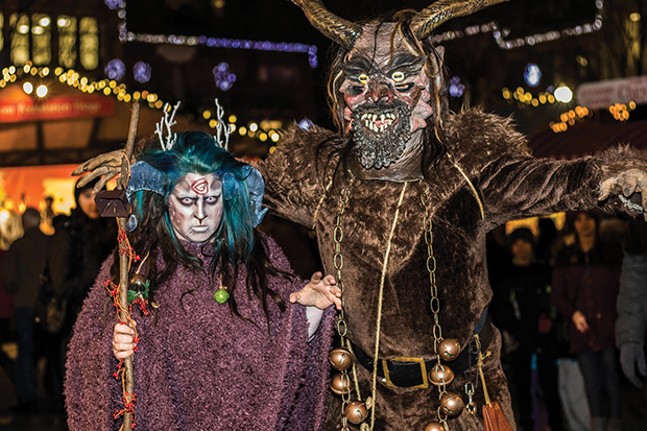 No one can say for sure why it happened when it did, but at some point in the mid- to late- 2000s, folks all around the world caught the Krampus bug.

Though the mythical Christmas devil has roots dating back hundreds of years in Norse, German, and Greek folklore, the character has enjoyed a popularity kick in the past decade, with a handful of B-movies, themed parties, books, annual listicles, parades, and who knows what else. You might remember Market Square's annual Krampusnacht festival, but if you slept through that and this is all news to you, Krampus is basically a punitive goat-demon version of Santa Claus who carries chains.

That sounds objectively terrific, so the question is why did it take the character so long to catch on? Even ignoring that the myth is super old, horror-Christmas crossovers have proven reliably successful since 1993's The Nightmare Before Christmas. What took so long to get Krampus on the marquees? Here are four theories on why the myth is so hot right now.

1. In the 2015 film version Krampus, the protagonist is a little boy who's bummed about his family's lack of holiday spirit. It turns out even having Adam Scott and Toni Collette as your parents isn't enough to keep the holiday gloomies away. They're a bunch of cynical, ungrateful, materialistic dicks, which leaves the door open for Krampus and his chains to get involved. Calling out consumer culture in Christmas movies is nothing new, but maybe we're just starting to embrace the hypocrisy of the holiday and take it to its logical end: a goat-demon who kidnaps children.

2. Along those same lines, maybe Santa Claus isn't really speaking to folks the way he used to. He's a lovely dude, but in the era of anti-heroes (aka mean men that people like for some reason), the whole nice-guy shtick feels a little one-dimensional. So it's appealing to think that under all that red felt is a vengeful, angry demi-god.

3. Remember “The Dayman” episode of It’s Always Sunny in Philadephia? When Charlie pitches the musical, the rest of the gang is confused because the plan has no enemy. "Who versus? Who are we doing it versus?" Maybe that's what Christmas has been missing all these years: an enemy.

4. Lastly, the most reasonable theory: the Halloween season is too short. With the crisp weather arriving later every year, people are nostalgic for the autumns of their youths. By combining the two holidays that earmark the season, we're able to extend it and reclaim some semblance of fall. Krampus lets us inject Halloween into the winter holiday season, turning the whole three months into an amorphous swirl of sweet holiday action. That's a good thing. Thanks, Krampus.