“I think food should be an expression of identity.” 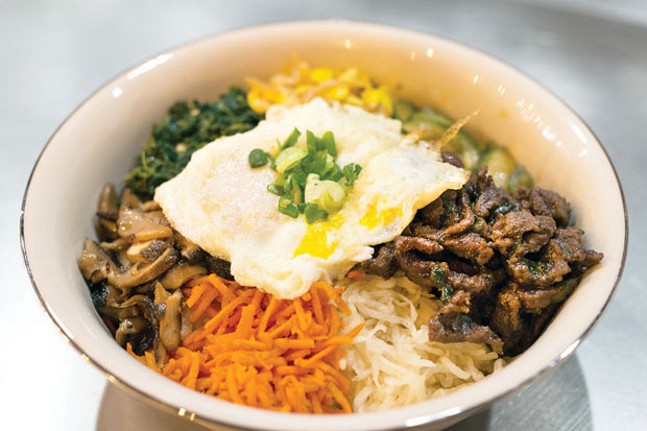 In early April, Chef Simon Chough opened Soju on Penn Avenue after six years of work and preparation. Chough is a 31-year-old first generation Korean American who grew up in Pittsburgh, surrounded by family and Korean cooking.

He worked in friends’ restaurants during high school and watched his uncle struggle to run his own restaurant downtown. “That was kind of a deterrent to me,” he says. After graduation, he left to study biochemistry in Honolulu and watched the restaurant industry step into the spotlight as a respected profession.

In Honolulu, he honed his skills at a variety of jobs, some without pay and all with long hours. He loved it and developed a strong relationship with mentors, including a Korean chef who took him under his wing. When he came back to the city in 2012, he bought the building on Penn Avenue that now houses Soju. 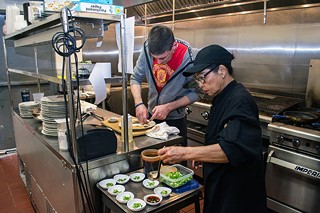 “I think food should be an expression of identity,” says Chough. His iteration of that identity is unique — not just in the context of Korean cuisine, family and his time in Hawaii — but also from history. Many Korean foods have a Japanese influence as a result of the Japanese occupation of from 1910 to 1945. Chough’s gimbap features vegetables and other ingredients rolled together in rice and “gim” (layered sheets of seaweed) and then cut into slices.

“People don’t realize the strong Japanese influence and they will see the gimbap as sushi, and it really is in some ways,” says Chough laughing. “My grandfather, he tells me this story. He’s had three different names in his lifetime. He was born with his Korean name and then the Japanese occupied Korea when he was a kid and gave him a new name and a new language. When the Japanese left he went back to his Korean name and then he came to the States and got an American name.”

Chough believes that Pittsburgh diners are ready to embrace Korean cuisine. “The majority of clientele so far is overwhelmingly not Korean,” he says. He’s spending time to make sure that the servers are trained to help guide newcomers through flavors and pronunciations. “Some things are a little more adventurous, like our kimchi, but I think Korean barbecue pleases anybody,” says Chough. He’s hopeful that clientele will learn to utilize his favorite side dishes called “banchan” which include spicy pickled vegetables (hint: try eating them between bites of meat to help cleanse the palate and cut the fat of the meat).