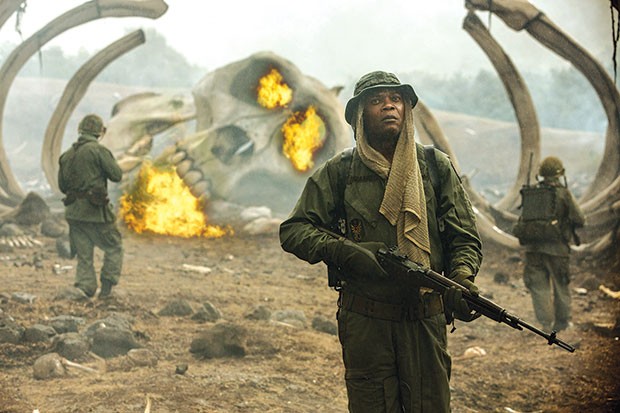 Directed by Jordan Vogt-Roberts
Starring Tom Hiddleston, Brie Larson, Samuel L. Jackson, John C. Reilly
In 3-D, in select theaters
Kong: Skull Island is an OK monster movie. Its special effects and various giant-beastie battles should hold the drive-in crowd. But fans of 1979’s Vietnam drama Apocalypse Now (and the 1899 Joseph Conrad novella Heart of Darkness that inspired it) will get an extra kick out of Jordan Vogt-Roberts’ retelling of the King Kong legend.

There’s a quick prologue set in 1944, in which two pilots — one American, one Japanese — survive crash landings on a seemingly deserted island. But their attempts to kill each other stop when a 100-foot-tall ape appears.

Flash ahead to 1973, and a businessman (John Goodman) is assembling a team to investigate a newly discovered island. The group includes: an Army assault-helicopter unit fresh from Saigon, led by the square-jawed Packard (Samuel L. Jackson); a photojournalist (Brie Larson); and a former British SAS dude named … ahem … Conrad (Tom Hiddleston), with expertise in “uncharted jungle terrain.”

The entry to the island involves gorgeous aerial shots of helicopters flying over mountainous jungle, while Black Sabbath blasts from speakers. The copters drop bombs that explode into fireballs among the lush greenery — and hey, it’s Vietnam all over again. And the natives, notably one gigantic ape, are not pleased to be invaded; Kong establishes dominance early by smashing the helicopters out of the sky.

The survivors wind up in two groups. One is headed by Jackson, who vows total hellfire annihilation on the ape. The other is lucky enough to find the island’s few humans, among them that American World War II pilot named … ahem … Marlow (John C. Reilly). He explains the island’s ecosystem, and how peace with Kong is vital in keeping even worse creatures at bay.

What the film lacks in plot, tension, dialogue and fully realized characters, it makes up for with some fantastic visuals. Besides the aforementioned helicopter assault, Vogt-Roberts treats viewers to extraordinary closeups deep into Kong’s soulful eyes, and the madness of Jackson’s flame-filled eyeballs; spectacular natural scenery (including digital Aurora Australis); and fantastical dreamlike scenes, such as an eerie march through giant-ape bone pile, partially obscured by green smoke.

And the allusions to Apocalypse Now pile up. We go upriver in a boat while CCR’s “Run Through the Jungle” plays, and Packard abandons all reason. “This is one war we’re not gonna lose,” he says through clenched teeth, even citing a domino theory of giant monsters.

Stretching out the Vietnam angle, most of the characters are lucky to get out of Skull Island alive, albeit humbled and bearing wounds from their aggressive meddling, and not taking the extra time to understand the locals. As for Kong, he’s booked by Warner Bros. to take on Godzilla — himself a literal and metaphorical manifestation of another war’s consequences — in 2020. Should be a real stew of man vs. monsters vs. military allegories.