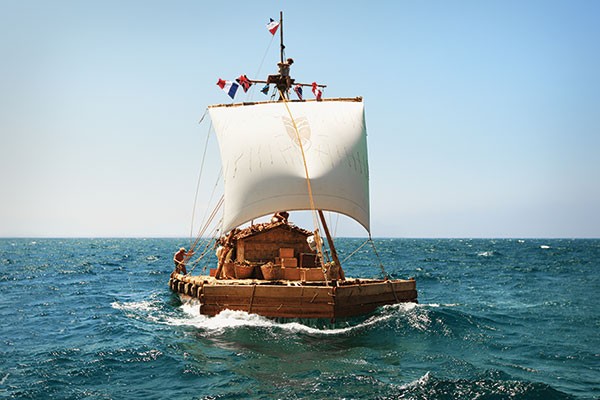 Joachim Rønning and Espen Sandberg docu-drama Kon-Tiki is a recreation of a recreation, but it's nonetheless a story that bears repeating to a new generation of armchair adventurers.

This real-life ripping yarn is set in 1947, when Norwegian Thor Heyerdahl (Pål Sverre Valheim Hagen) and five plucky companions set out to prove that Polynesia could have been populated from the Americas, and not Asia as then believed. So Heyerdahl built a balsa-wood raft, and he and his crew floated off from Peru, hoping to recreate an ancient voyage, powered only by wind and current. Nearly 5,000 miles of ocean, and no back-up plan.

If you have ever seen one of the 50 million printed copies of Heyerdahl's eponymous book, you can guess that the outcome was favorable. In the film, the mariners ride out the usual sea-going troubles: sharks, storms and, most interestingly, the human conflicts that arise when six people are confined to a tiny space for more than 100 days.

The Oscar-nominated film is a bit cheesy in spots, but is entertaining and well shot, particularly the scenes at sea which must have been a logistical challenge. Heyerdahl's journey is still an inspirational tale, and one of the last great low-tech adventures of the 20th century: a wooden raft on which sun-baked men pit their faith in a "crazy" idea against seemingly insurmountable odds — and win.