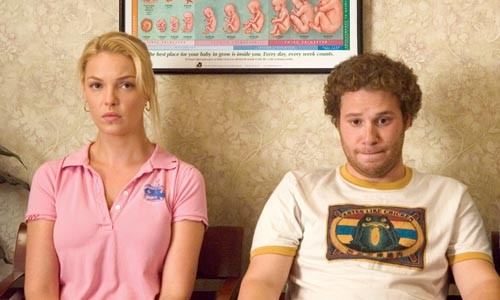 Oops, we're parents: Katherine Heigl and Seth Rogen
For writer/director Judd Apatow, Knocked Up is the logical follow-up to his 2005 sleeper-hit comedy, The 40-Year-Old Virgin. After you've tackled your first ... ahem ... encounter, what is there out in boy-girl sex-land but a world of trouble?

It all begins -- and ends -- well for Ben Stone (Seth Rogen), a goofy-sweet man-child who gets lucky one night with a pretty girl he meets at a nightclub. That Alison Scott (Katherine Heigl, from TV's Grey's Anatomy) is normally out of his league is obvious. (During their hookup, Ben blurts out, "You're prettier than I am.") But Alison is drunk, and all cats are gray at night. In the morning, each slinks amiably away.

But lost in the boozy shuffle was the condom. Ben's one glorious night with a babe turns to "Oh shit" when, a few weeks later, Alison checks back in to say: I'm pregnant, keeping the baby, and can we start being parents now?

Turns out they don't have much in common except that baby. Alison's on the fast track at the E! channel, and Ben's one of those puppyish slackers who shares a mangy den with a crew of unemployed malcontents. The lads, for instance, are diligently researching a soon-to-be-launched Web site itemizing all nudity in films, but as yet no one has busted out the programming book. Regardless, it's a happy hazy holding pattern of boobs, beer, bongs and a beard. (In a running gag, one housemate has undertaken a tonsorial dare that generates a slew of great one-liners.)

That Ben and Alison are hopelessly mismatched forms one arc of Apatow's comedy, and it's the familiar rom-com battlefield (assuming you've bought the decidedly fantastic premise that two strangers in the 21st century would pursue a relationship simply because a baby was on the way). The domestic travails of Alison's married-with-children sister and brother-in-law (Leslie Mann and Paul Rudd) add a second dimension to the Mars-and-Venus squabbling.

But it's Apatow's third path of comedy that opens up, if not the freshest ground, then at least the freshest approach. In tracking Ben's quiet freakout on his route from the oft-cited Spider-Man 3 to "Itsy Bitsy Spider," Knocked Up becomes the goober-male equivalent of a chick flick.

Ben is the everyman doofus -- an archetype deeply sympathetic to young male viewers, just like the girl-next-door in a standard romantic comedy. And like his female counterpart, Ben, through earnest bumbling, taps his true good-guy nature and makes the right choice in love and life. Buried beneath the body-by-Budweiser, the farts and admittedly attractive nature of a self-indulged life are all the genre conventions: the shrieking pal; the cautionary mentor (Rudd); the wacky but supportive parent (Harold Ramis); the crazy night out (in Vegas, natch); the silly break-up, with subsequent mooning and realization of what the heart really desires; and the last-reel reconciliation and marriage. (Though these days, leaving the hospital with your baby-momma is close enough.)

As he did in 40-Year-Old Virgin, Apatow liberally sprinkles his romance with bawdy humor, much of it laugh-out-loud funny. And move over, Tarantino, because the funniest, pitch-perfect pop-culture lines this year are zinging out of here: Apatow has a great ear for how guys communicate through insulting banter. And you'll squirm too, as Knocked Up dishes scenes all too familiar from our collective pathetic lives. Such offerings as a buffet of bad sex (too drunk, too shy, too pregnant) and a profusion of frank ob/gyn talk should make this film a real ordeal for teens out on date night.

Yet ultimately, Apatow's reach exceeds his grasp. At 90 minutes, Knocked Up might have been a wicked gem; at over two hours, the mismatched romance begins to trump the laughs. When Apatow stretches beyond easygoing male camaraderie and the comical mounting horrors of pregnancy, his observations on domesticity too closely resemble a traditional, albeit R-rated sit-com: Women are domineering control freaks, while men are whiny, unfocused babies, and thus, each needs the other; babies are life-changing; the family unit is primary; and tra la la.

These aspects will resonate most with those who have already crossed the line from doooode to Daddy, and might leave more raucous audience members feeling duped. Growing up is good, to be sure, but it's never as funny for the spectators. For my hard-earned money, I'd rather float on two hours of vicarious live-free, live-high craziness than get another dose of the happy-families rom-com paradigm, even if it's camouflaged for boys who hate chick flicks.

Still, Ben and Alison seem like nice folks. I wish them the best of luck -- and hope that Apatow's next film isn't one of those bratty-kid-filled, family-vacation-from-hell non-starters.