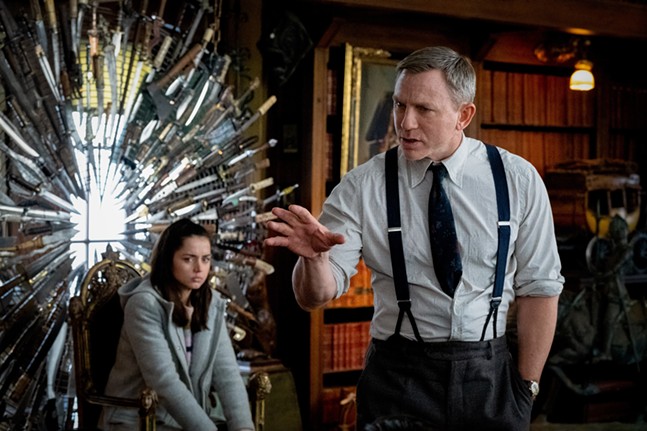 Lionsgate/Claire Folger
Ana de Armas and Daniel Craig in Knives Out
To inherent wealth is to believe that the world is the oyster and that your family invented oysters, even if you've never been to the sea. It's not a crime to be born into wealth, although it almost guarantees greed, which encourages crime. In the unrelentingly fun murder mystery Knives Out, written and directed by Rian Johnson, a family whose life revolves around inherited money descends into chaos when they suddenly lose access to it.

Detective Elliot (LaKeith Stanfield, underused) and hired P.I Benoit Blanc (Daniel Craig, with an accent like Colonel Sanders up to 11) arrive at the imposing mansion of famed mystery writer Harlan Thrombey (Christopher Plummer) to investigate his death. They are received coldly by his family, who have assembled at the Virginia estate because, although the patriarch's death was ruled a suicide, Blanc was hired by an anonymous person to investigate the possibility of murder.

The family includes Harlan's daughter Linda (Jamie Lee Curtis), who runs a company founded with her father's money, Walter (Michael Shannon), who publishes his father's books, widowed daughter-in-law Joni (Toni Collette), a Goop-y influencer, as well as all their children. Everyone' lives are fueled by their father/grandfather's money, and all have a plausible motive for his death. Harlan's at-home nurse Marta (Ana de Armas) is particularly useful to Blanc's investigation because lying literally makes her puke (a clever but implausible device that the film relies on a little too hard).


Marta, who the Thrombeys describe as "like family," becomes more of a central figure than any of the family would actually like. She was close to Harlan and feels the pain of his death, but she also has a pit in her stomach that the rest of the family doesn't. Aside from being a non-rich employee, Marta lives with her mother, an undocumented immigrant — it's a running joke in the film that each family member thinks she's from a different South American country.

The film, set in present-day, leans into the fraught political climate, causing the family to clash, much like yours might at Thanksgiving. Marta becomes a litmus test for the family members' beliefs. Joni and her daughter are the only ones who check in on Marta's wellbeing. Linda's husband Richard (Don Johnson) complains about "illegal immigrants" in the same breath that he hands Marta a used plate. Walter's teen son is described as "literally a Nazi." But a key point in this movie — and a theme that seems to permeate the air of 2019 — is that class overrides everything else. Money is more important to the family than any beliefs they might have. As soon as their access to Harlan's inheritance is threatened, all principles go out the window.

The dark side of the family is best exemplified in Linda and Richard's son, Ransom (Chris Evans), a huge and beautiful shithead who missed the funeral, but showed up to the will reading. He doesn't even pretend to work, refers to the family's employees as "the help," and calls his wealth his "birthright." He sucks immensely, but it's so fun to see Evans playing a can of rotten sardines since we're so used to him playing a scoop of vanilla ice cream.

All the actors seem to be having a blast, although none more than Craig, who is high off the joy he gets from parodying a Southern drawl. Benoit Blanc, like all of the characters, is an inflated stereotype. The family is a caricature of what peasants think rich people are like. Marta is one of the few who is not a caricature, because she's a normal. Unlike her employers, she is pure of heart.

Knives Out is so fun that you don't even want to think about its flaws, but it is reductive in its reasoning of Marta as wholly good because she is poor. The film reminds the audience over and over again that Marta's actions differ from the Thrombey family because of her background, which makes her empathetic instead of conniving. De Armas spends a lot of the film with sad and concerned eyes, though she holds her own in a (metaphorical) knife fight.

Like any good murder mystery, Knives Out is filled with clues from the very beginning, but that doesn't make it any easier to find the answer. It holds onto the key until its deeply satisfying end.