“This is the best idea ever.” 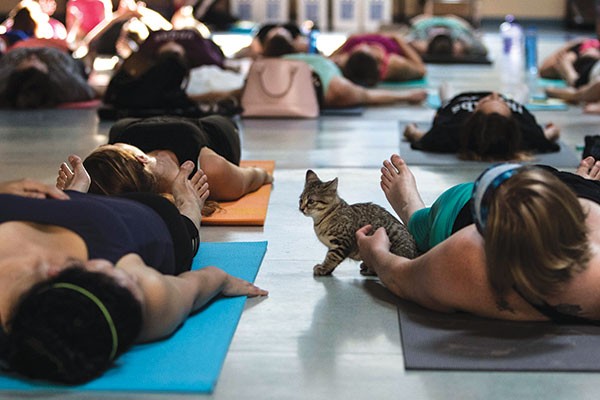 Photo by Luke Thor Travis
A yogi sets an intention: playing with a kitten.

Dressed in yoga pants, gym shorts and T-shirts, with water bottles in tow, 40 eager people sat on rubber mats facing a blank beige partition wall. At a minute to 6 p.m., a switch flipped, and with a loud hum, the wall slowly slid away to reveal what these yogis had come to see — kittens.

In unison, the crowd squealed, sighed a collective “Awwwwwwwww,” and whispers of “This is the best idea ever” could be heard.

“I just want one to crawl on me so bad,” said Neha Abraham, who fosters several cats at her home.

Animal Friends, a rescue and adoption nonprofit in Pittsburgh’s North Hills, hosted the event — simply called “Kitten Yoga” — to call attention to the influx of kittens brought to the shelter in late spring.

“It’s a way to get people here who normally don’t come,” said Erica Keith, event and adoption assistant at the shelter. “It’s like a sneak-attack way to raise awareness. Also, it’s good for the kittens to socialize with so many people. At first they’re overwhelmed, but by the end of the night, you see them cuddling with people. Even if they don’t get adopted tonight, it helps them to get adopted easier in the future.”

The instructor, Marguerite White, of Vital Glow Yoga, who was teaching this class for the third time, asked everyone to put their prayer hands at heart center and send “good, home-finding vibes to these little creatures we’re here for.”

During the class, Keith and volunteers carried the kittens throughout the crowd and set them next to participants. Other volunteers employed feather toys and laser pointers to get the kittens moving. Giggles grew so loud at points that White could barely be heard.

Kittens ran on the concrete floor, sliding and crashing into yoga mats. Some kneaded the mats with their little paws. It wasn’t uncommon to see participants completely skipping an asana to snuggle a kitty.

“This is like pigeon pose, except this [modification] keeps your head up,” White instructed. “Because let’s be real. Seeing the cats is why we’re all here.”

Everyone burst out laughing when one kitten decided to hang out under Joe Giedel, a first-time yogi, in plank pose. “Lower down slowly, watching for kitties,” became White’s refrain.

After class, several kittens fell asleep in the arms of participants. “The cats made it a pleasant experience,” Geidel said.

While balancing a kitten on her back in a halfway-lift pose, White said, “Yoga and cats go together. Whenever I do yoga at home, my cats want to be near me. Two weeks ago in this class, one kitten went to sleep on my mat and stayed there the entire time.”

As Abraham lovingly cradled one of the animals, she expressed a sentiment on many participants’ minds, “I want to take all of them home.”

Meanwhile, the volunteers began to clean up.

“The hard part is, now we have to corral them all and try to figure out who they are,” said Valerie Schreiber, a volunteer. “But they’re all microchipped, so that’s good.”