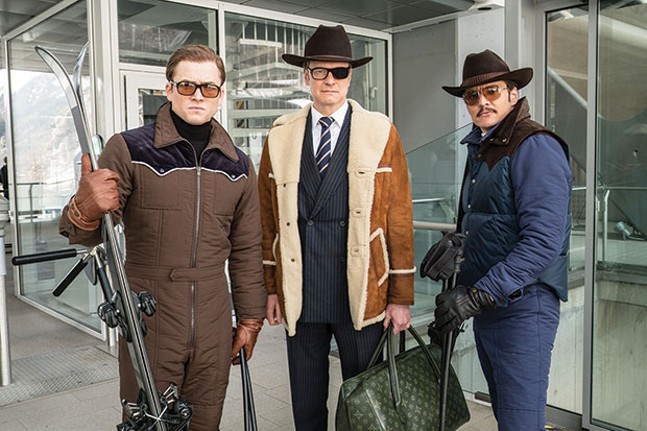 Some movies should not be two-and-a-half hours long, and that includes Kingsman: The Golden Circle, Matthew Vaughn’s sequel to 2014’s Kingsman: The Secret Service. But while this movie is completely unnecessary, it’s also totally enjoyable. It’s the perfect big, dumb and fun action blockbuster to wrap up a lackluster summer of movies. The original film’s dandyish British spies (Taron Egerton, Mark Strong and Colin Firth) face a crisis of doomsday proportions and turn to their American counterparts for support. This group inhabits a Kentucky whiskey distillery, and is led by Champagne (Jeff Bridges), Tequila (Channing Tatum) and Ginger Ale (Halle Berry). Together, they work to take down Poppy (Julianne Moore), a Johnny Rockets-obsessed drug lord who also hates drugs. Poppy makes for a surprising evil foil — she has sickly sweet demeanor, rather than be the more traditional villain brooding in a dark cave. The movie never fully succeeds in its attempt to parody the spy genre while also sticking to its tropes. But if you can look past that, and the aforementioned length, it is full of fast-paced action sequences beautifully untethered to reality, like a knife getting lassoed out of thin air and a robot dog getting beaten to death with a bowling ball. Plus, there are badass spy weapons, shockingly good musical cues, and Elton John in one of the best cameos in recent memory.