For years, the joke was that Ireland's greatest export was its youth. Before the heady prosperity of the Celtic Tiger years, young Irish fled in droves for economic opportunity abroad. Many embarked for neighboring Great Britain, where a ferry ride of a few hours left open the possibility of an easy return home. Such a hopeful journey, and its bitter end, is the subject of Tom Collins' melancholy drama Kings.

In 1977, a group of Irish lads leave for London, vowing to find their fortune and return home to acclaim. They find low-level work in the construction trade, and hunker down in the immigrant neighborhood of Kilburn. Thirty years later, when Kings opens, the men re-unite to finally send one of the gang back to Ireland -- "young Jackie," whose broken middle-aged body is going home in a casket.

Collins adapted his film from Jimmy Murphy's play (the more sardonically titled The Kings of the Kilburn High Road). Thus, despite its occasional flashbacks, street scenes and jumpy handheld camerawork, the story grows increasingly stagebound as the men gather for Jackie's wake, itself a sad affair held in the disused backroom of a former Irish pub. Kings lightly sketches the half-dozen men, focusing on two unemployed, alcoholic roommates -- angry Jap (Donal O'Kelly) and desperately sad Git (Brendan Conroy) -- and their former mate, Joe (Colm Meaney), the one who struck it rich. As the booze flows, recriminations fly, dark secrets are revealed and achievements (or not) are tallied.

It's well-acted, if familiar turf. You won't be surprised to learn the men have abandoned their adolescent dreams for a variety of not-so-great compromises, in part because that's how life goes, but also because they set sail at the wrong time. In Kings' more insightful moments, many of them throwaways, Collins depicts the collapse of Irish immigrant communities (now replaced with more recent immigrant populations), which leaves these men adrift. Nor can they return home, now that Ireland is a modern success story and they are failures from a distant past. This is poignant stuff -- these men of no place -- but I cringed when Collins felt the need to have his characters succinctly vocalize such themes.

So despite its downbeat tone and hints of day-to-day ugliness -- domestic abuse, depression, drugs, prejudice (both toward and by our lads) -- Kings struggles to rise above its theatricality: five distinct characters in a room who laugh, cry and fight. And if we do ultimately feel for these rather unlikable men, it's more likely that we're culturally pre-conditioned to cast a tear for boozy Irishmen who sing "Danny Boy" off-key than that we're moved by Collins' skill at excavating the bitter ironies of one generation of immigrants. In English and Irish Gaelic, with subtitles. 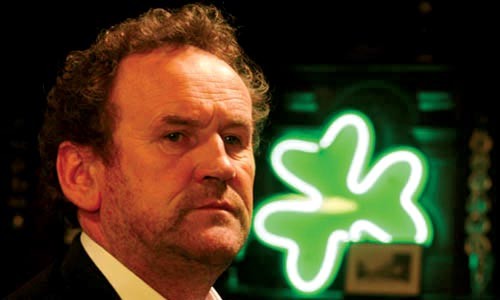