While our smoking ban languishes in legislative limbo, one small coterie of the local dining trade is surely exhaling a hazy sigh of relief: the area’s hookah bars. To think that this emergent trend could have been snuffed almost before it was established!

As nonsmokers, we’re all for the smoking ban, in theory. But as a practical matter, we would hate to see anything threaten our new favorite Egyptian restaurant — which also happens to be a hookah bar: King Tut, in Penn Hills. Heck, it’s the only Egyptian restaurant that we know of around here, but it just might be our favorite even if it had competition. It’s that good.

Unlike some hookah houses that serve flavored tobacco and not much else, King Tut has more to offer than sweetly scented smoke, including an array of teas, fresh fruit juices and, best of all, a lengthy menu of Egyptian delicacies. The venue is a repurposed fast-food building that has been decorated with hieroglyphic prints and the recurring visage of Tutankhamen himself, on everything from tablecloths to floor coverings. You can eat on the restaurant side, at a proper table with chairs, or you can do what we did: sit on brightly upholstered floor cushions on the café side, where the food — and the hookahs — are served on low tables under low light for a casually exotic atmosphere.

And what, precisely, is Egyptian cuisine? Not surprisingly for a nation that has been a cultural and trade crossroads for millennia, it blends elements spanning the southern Mediterranean from the Middle East to Morocco. Thus there are hummus and falafel, meat stews and tagen, the latter reminiscent of North African tagine.

King Tut also offers American-style munchies for those who prefer their hookahs with something a bit less exotic. And we discovered that these are not necessarily thoughtless acquiescence to American tastes: The French fries were among the best we’ve ever had. Thin, but not shoestringy, they possessed real potato flavor, substantial but not soggy texture within, and, best of all, a sprinkling of lemon-pepper breading, a light, powdery blend which added the perfect amount of savory seasoning. This approach to fries made us think that the fried seafood items on King Tut’s menu might also be worthy.

Moving to more authentically Egyptian offerings, we shared an order of foul, which can be served as breakfast food in Cairo. It consisted of fava beans mashed with seasonings and the diner’s choice of toppings: olive oil, salsa, egg, or butter and garlic. We chose the latter and thoroughly enjoyed the texture — like American baked beans or Indian dal — and the complex smoky, creamy, garlicky flavor.

Lamb shawerma tagen consisted of grilled meat sautéed with tomatoes, peppers and onions, then layered with fluffy rice and baked. The lamb was tender and full of flavor, while tomato sauce, garlic and vinegar added tangy notes to the sweet tomato, zingy onion and slightly bitter green pepper. Egyptian country bread — similar to pita — was served alongside.

Mulukheya jute, described on the menu as a stew, was really closer to a soup. Jute, a hearty green, was shredded and cooked with chunks of meat in chicken broth and olive oil with garlic and other seasonings. Interestingly, this dish is served with different mix-ins on a daily basis; the night we visited, it was sweet English peas. The mild vegetable and meat flavors mixed amiably, allowing the velvety texture and rich flavor of the olive oil to be the star of the dish. 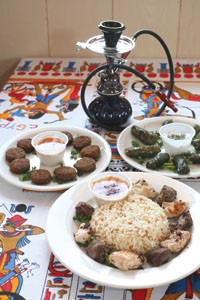 A table set for a king: assorted Egyptian fare