Why is King Lear one of Shakespeare's most beloved plays? Macbeth is more concise and organized. Hamlet empathizes with flawed heroes and repentant crooks. Romeo and Juliet is, if nothing else, romantic. Lear is long, disorganized, unromantic and empathizes with no one. Lear is a jerk, two of his daughters are vicious opportunists, their husbands are idiots, and the only hero, Cordelia, is exiled in Scene 1. Today, Lear is haunted by Ran, the Japanese film it inspired (and which is superior in many ways), and by The Godfather, the far more enjoyable story of an aging patriarch and his violent, quibbling children. Scholars suggest that even Shakespeare struggled with Lear, writing at least two disparate versions. And no matter how great the production, Lear himself can look less tragic than pathetic -- a loud, grimy Santa Claus in the latter stages of Alzheimer's.

Still, Pittsburgh Irish & Classical Theatre has decided to produce Lear, and again we may watch the imprudent monarch divide his kingdom. Lear retires, two daughters take over, politics intervenes, Lear is rejected by everyone, war breaks out, conspiracies are exposed, and everything ends in death. At least Romeo and Juliet got to roll around in the sheets. Lear, senile and insane, wanders through the rain, wailing into the darkness, comforted only by his groveling jester.

Dakin Matthews is a kingly Lear -- he's big-bodied, big-bearded and big-voiced, and he commands the stage with a playful, paternal presence. Matthews understands that Lear isn't a bad man, only a well-meaning blowhard. One ill-fated decision leads to another, and Lear is subsumed in madness and guilt, yearning only to turn back the sundial and reclaim his family. Thus, Matthews must contend with dozens of mournful homilies. Frankly, Shakespeare assigned too many words to an elder actor -- who, at Lear's age, wants to memorize so much poetry? -- but Matthews trumpets these verses admirably.

The supporting cast includes princesses, dukes, doctors, soldiers, dejected children and blinded nobles, and each one is grand. They perform on a rustic stage of mud and burnished metal, as lonely-looking as an abandoned sculpture garden. There are extraneous gimmicks -- the percussionist playing a modern drum kit, the helpers adjusting the spotlights in full view of the audience -- but these are ignorable distractions. James J. Christy directs an otherwise traditional production, with ambiguously medieval dress and simulated rain spraying from the ceiling. It may not always be good to be the king, but if you care to see Lear at all, with this production it's good to be the audience. 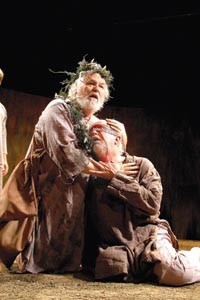