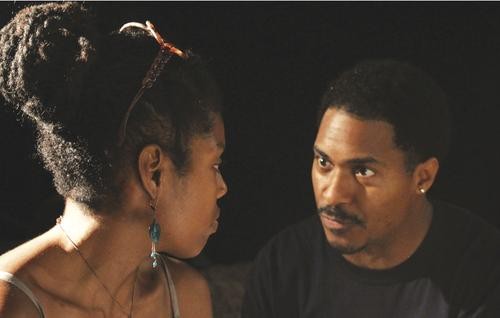 There's no argument that Pittsburgh Playwrights Theatre Co. fully deserves its new part-time upgrade to the glorious new theater in the August Wilson Center for African American Culture, most fittingly starting with an August Wilson play. The question is whether the company's talents can survive the leap to a much larger space. Moreover, while the gritty intimacy of the troupe's long-time black-box home base virtually dissolves the "fourth wall," that's much harder to manage from the Center's proscenium stage.

The company survives the acid test -- at least adequately for now -- with King Hedley II. The late Wilson's "'80s play" (which premiered in 1999) is perhaps his most complex: his first to include characters from previous plays and to crystallize themes for subsequent works in his Century Cycle. There is anger, nay, ferocity, mixed with despair, disillusionment, death and a hint of redemption. Big ideas just made for Pittsburgh Playwrights' vision.

Eileen J. Morris directs a tightly knit cast whose chemistry bubbles up and flows into the audience, albeit with the occasional technical glitch. The Center's greater production possibilities (lighting, sound, etc.) should be better harnessed for the show's concluding performances so as not to impede the delicate balance of words, physicality and mood.

Benjamin Cain charges the title character with insistent energy. His King is a man driven by dreams, but riven by conflicts and obstacles he cannot grasp. Tyla Abercrumbie richly embodies King's wife: not a queen but a principled realist trying to stay on the right and righteous path. And she even looks good in an '80s 'fro. Jonas Chaney mightily wrestles with the shaman-like character, Stool Pigeon/Clayman, and with soliloquies varying from mystical to comic. Chrystal Bates and Kevin Brown heat up the stage with rich sensuality in between pursuing plot points of betrayal and revenge. Completing the cast, Leslie "Ezra" Smith readily handles both the comic relief and his character's role as a catalyst for blood vengeance.

Filled with rich humor as well as dark drama, King Hedley II presents a fitting challenge to Pittsburgh Playwrights as it essays a new venue for productions of August Wilson's work.