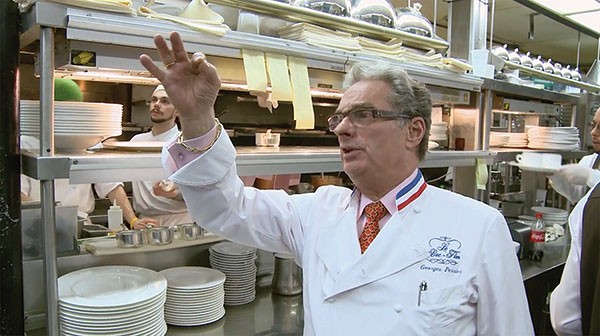 For decades, Le Bec-Fin, in Philadelphia, was regarded as one of the country’s very best French restaurants. Its owner and chef, Georges Perrier, trained as a saucier in France, and through myriad restaurant trends and food fads, remained committed to classic French cuisine. (The sauce, Perrier reminds us, is the basis of all French cooking.) But as director Erika Frankel catches up with Perrier, the bell may have finally tolled: The desire for haute cuisine served in brocaded and chandeliered dining rooms has faded; America’s palate has shifted to new fusion flavors; and Perrier, who still works every day, is older and wearier. Still, the fierce Perrier, a quintessential cranky teddy bear who nimbly shifts between jokes, shouted insults and Gallic shrugs, perseveres, casting his lot with a new and younger chef to run Le Bec-Fin. The film is a celebration of Perrier’s longevity in a notoriously brutal business, as well as an elegy of sorts for a style of fine dining that is now gone. The food served at Le Bec-Fin looks great, but it’s hard to argue for the stuffy atmosphere. And so it’s relegated to the history books, but not before we mark its passage and appreciate this once-critical spot of America’s ever-evolving food scene.