It's a wild play, to say the least, constantly challenging both the actors and the audience 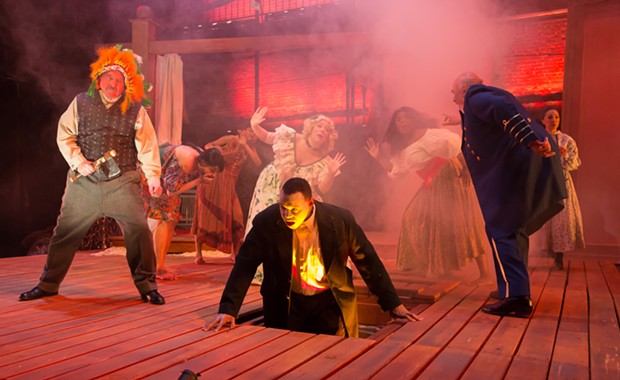 Photo: Rocky Raco
Martin Giles, Ananias J. Dixon and company in An Octoroon
An Octoroon is not for the faint of heart.

In the prologue alone, a Black man dons white face, a Caucasian man dons red face, and an Indian man paints his face black. Throw in a few ton of N-words and F-words and, phew! Are you uncomfortable yet?

Kinetic Theatre Company's An Octoroon begins with playwright BJJ (Ananias J. Dixon) standing on stage in only his tighty whities, speaking to the audience about the play he's written and about to perform. He's adapted it from Dion Boucicault's original 1859 play The Octoroon, about Zoe (Sarah Hollis), a beautiful woman who is an "octoroon," a person who is one-eighth Black, living on a struggling plantation called Terrebonne.

The play, he explains, was supposed to be performed by white actors. Only, all of the white actors BJJ hired quit over the racist script. Then, BJJ looks up at us and we realize, in a moment that causes practically the entire audience to gasp, he's painting his face white.

Watching BJJ go on about the play in the background is original playwright Boucicault (Martin Giles) who enters the scene with an amazing amount of hilarious "Fuck you!"s exchanged between the two actors before painting his face red and putting on a Native American headdress. BJJ's assistant (Parag S. Gohel), fidgeting with items off-stage as the two men argue, stops to put on blackface and a wig, and the staged play begins.

Dixon, Giles, and Gohel all play multiple roles throughout the performance, each one better than the last. All three actors blew me away with their ability to flow through often difficult lines with ease, knowing the discomfort they would cause in those watching.


Is hearing the N-word repeatedly shouted by a Black man in white face more or less easier to accept than folks watching a white actor in the original The Octoroon? Is it OK to laugh? The guilt. The conflict. It's a wild play, to say the least, constantly challenging both the actors and the audience.

The heart of the staged play revolves around Zoe, the octoroon. Terrebonne's owner, Zoe's father, has just died and his nephew George (Dixon in white face) has inherited the plantation and flown in from France to take over the property. He soon becomes the love interest of Dora (Jenny Malarkey), a rich Southern white woman, played in a comical, over-the-top "Why, I never!" fashion. George, however, has fallen in love with Zoe.

There's a disclaimer shown on screen at the beginning of the staged play that states, "I don't know what slaves sounded like, and neither do you."

The juxtaposition between the jargon of the characters in painted faces and the dialogue of the slaves portrayed by African-American actresses is jarring. The painted actors are crude, dramatic, over-the-top stereotypes; the actresses speak like modern day girlfriends gossiping about boys, talking shit on other slaves.

The real playwright of this adapted play, directed here by Kinetic Theatre's producing artistic director Andrew Paul, is Branden Jacobs-Jenkins, who won the 2014 Obie Award for Best New American Play.  Paul states in the program notes that the play "uses purposefully offensive dialogue and actions to tell its story." According to the playwright, "Ugly feelings have a place in the theater!"

Paul has taken a stellar cast and given Jacobs-Jenkins' play its due justice. He successfully took a shocking script and gave it life, blending old racism and new, often blurring the lines, questioning how much we've actually grown in America since The Octoroon was first written.