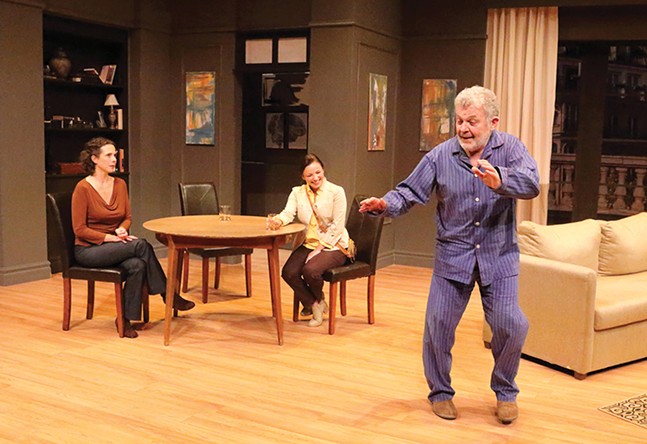 The traditional portrayal of Alzheimer’s disease on screen or stage often presents suffering characters as vegetative and blank, or zanily scatterbrained, all misremembered names and detached paranoia. Florian Zeller takes a different approach in his 2012 play, The Father.

Here, the audience shares in the character's confusion. The events on stage are as confounding and illogical to the character as they are the audience. It's infuriating and saddening to be so isolated in your own reality, so when the suffering lead explodes into bouts of anger and or pouting tantrums, the audience is right there with him.

The Father, staged by Kinetic Theater at New Hazlett Theater through September 23, tells the story of a middle-aged woman named Anne in her attempts to take care of her aging father, Andre. He is suffering, and though words such as "Alzheimer's" and "dementia" are never spoken, his symptoms are clear and getting worse. Andre and Anne live together in Paris with Anne's increasingly exasperated partner, Pierre, who's eager to find a nurse Andre can get along with so he and Anne can get on with their lives. He'd like to visit Corsica.

The story is told in a series of vignettes, punctuated by stage lights being abruptly shut off, then turned back on, essentially resetting Andre's reality. With each transition, the set of the interior apartment loses a few items; what starts as a well-groomed, handsome, lived-in apartment is cold and blank by the end. It may sound a little heavy-handed on paper, but it works.

As with the furniture, the characters are reconfigured when the lights come back on. A short, warm brunette nurse from one scene is blond-haired and curt in the next. Anne has plans to move to London, then, when pressed by Andre about it several scenes later, she has no idea what he's talking about. Her response is patient pity, and the audience feels his bewilderment and frustration at a deep level. A few of these reality-shifting transitions led the audience to audibly gasp. It's exasperating.

Sam Tsoutsouvas is magnetic as Andre. His helplessness and anger are expected and relatable, but Tsoutsouvas' performance is best when expressing the person Andre was once. Though diminutive and in pajamas for most of the play, the character is portrayed as someone who was once very charming, but with the capacity to be cruel and aloof. Those traits still swirl around in there somewhere and it's mesmerizing watching them seep out of Tsoutsouvas as if beyond his control.

It's probably not surprising to hear that The Father is a bleak outing. Then again, its job isn't really to uplift. What it aims to do, and succeeds at, is putting the audience in the shoes of this suffering character and telling a familiar story in a way that it hasn't been told. Its effects linger long after the lights go off for good.