“I’m the only one here that’s left to talk about it.” 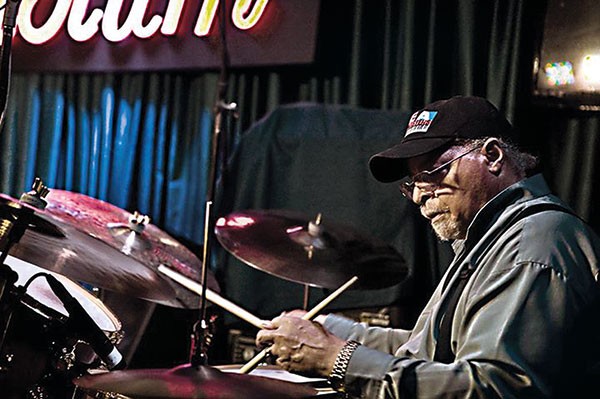 Photo courtesy of Jimmy Cobb
Back to Blue: Jimmy Cobb

Jazz pundits consider Miles Davis’ Kind of Blue to be one of greatest jazz albums of all time, if not the best in its class. For casual listeners it oozes atmosphere and sensuality, with languid melodies floating over just the right level of echo. For serious jazz fans, the 1959 album lays claim to a soon-to-be legendary sextet that utilized different methods of improvisations (modes, rather than chords), and took the music to greater heights. Anyone wanting a crash course in jazz history need only explore the careers of the players: trumpeter Davis, saxophonists Cannonball Adderley and John Coltrane, alternating pianists Wynton Kelly and Bill Evans, bassist Paul Chambers and drummer Jimmy Cobb.

Today, Cobb is the only living member of that group. His longevity, as well as his affiliation with the landmark record, more than earns him a role in 4 Generations of Miles, whose members encompass the various phases of the trumpeter’s wide-ranging career. Originally convened as a 2002 recording project, the group currently features: guitarist Mike Stern, who played with Davis during his ’80s comeback; bassist Buster Williams, who briefly played with him in 1967; and saxophonist Sonny Fortune, who played in the rollicking electric version of the Davis band during the ’70s.

Cobb played with Davis several times during the mid-’50s before he was officially asked to join. “He called me one evening around 6 o’clock. [Drummer Philly] Joe [Jones] wasn’t going to be in the band no more and he wanted me in the band. He said, ‘I’m working tonight — in Boston. We hit at 9 o’clock,’” recalls Cobb, who wasn’t going to pass on a golden opportunity. “So I got scuffling, packed up the drums and went to La Guardia airport and caught a shuttle up there.”

Davis never gave his musicians direction, unless he heard something he didn’t like. Only then would he speak up. “He expected you to add something. That’s probably why every time somebody [new] got there, the music would change,” says Cobb. “He’d sort of lean toward whatever these guys could add, to what’s already there.”

The lineup of the 4 Generations band could draw on all of Davis’ bold directions, but they stick closely to the time when Cobb played with him. When it comes to the trumpeter’s electric period, Cobb has mixed feelings. “Some of the guys that were working with him didn’t really know what they were doing or what they were supposed to do. I think everything was a big electrical experiment,” he says, though he enjoyed Davis’ late-period recordings with bassist Marcus Miller.

Cobb, 87, still plays on a regular basis, swinging hard with his group Cobb’s Mob. He visited Pittsburgh last fall as part of the University of Pittsburgh Jazz Seminar. But he is still most closely associated with Kind of Blue, which suits him fine. “I guess it’s a plus,” he says. “The plus is, I’m the only one here that’s left to talk about it. To be associated with all those guys that made the record is a beautiful thing.”