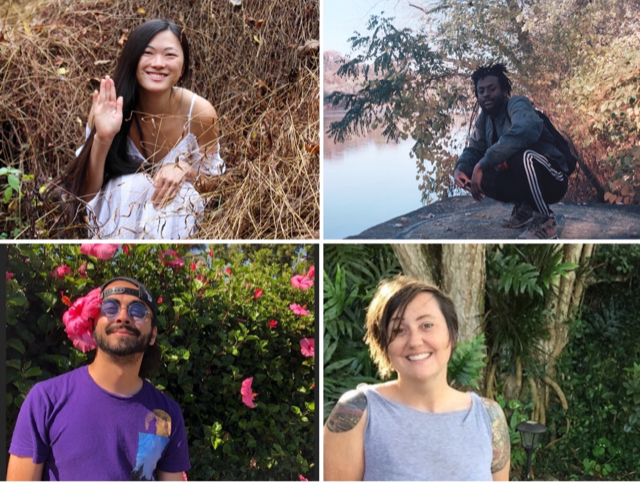 Photo: City Books
Clockwise from top left: Kim Rooney, Khalil Malik, Vivian Lee Croft, and Pravin Wilkins
City Books has named Kim Rooney as its second Writer-in-Residence. Spanning from July 1-November 30, Rooney will have a permanent desk in the North Side bookstore and spend 3-5 hours a week on-site, during COVID-adapted business hours, to initiate new writing or to advance existing works-in-progress. City Books offers the residency twice a year, providing writers the opportunity to pursue individual writing goals or projects without the expectation of a page count or publication.

Rooney, a Chinese adoptee from Jiangsu Province, received a BA in English writing and a BPhil in communication rhetoric at the University of Pittsburgh. Her work "examines the ways identity is constructed and maintained" and has been featured in The Offing, The Jellyfish Review, The Pitt News, Forbes & Fifth, The Review Review, Pittsburgh Magazine, and Three Rivers Review, among others.

In addition to Rooney's residency, City Books is featuring two virtual Writers-in-Residence, Khalil Malik and Pravin Wilkins. Malik, a co-founder of the Empty Space Project, is a self-taught visual artist, fiction writer, and poet whose work centers on Black youth and addresses the reality of Black people living in Pittsburgh. Wilkins is a playwright, poet, and screenwriter from San Diego, Cali, and his work typically deals with race and class struggle.

All three writers will get a 40% discount on books and merchandise, receive a City Books Reader’s Journal, and curate Resident’s Choice bookshelves both in-store and online.

City Books' first Writer-in-Residence, Vivian Lee Croft, whose term takes place March 1-June 30, will continue to receive the benefits of the residency into the fall as she was unable to take full advantage due to the stay-at-home order. Croft also received a One Northside grant from New Sun Rising for her participation in the residency, and she has transferred the money to the incoming writers among whom it will be proportionally divided.

Croft is the founder and director of Write Pittsburgh and Margaret L. Whitford Fellow at Chatham University, and it was her who approached City Books owner Arlan Hess after a bookstore event in December with the idea for a residency program.