Photo: Courtesy of Kim Gordon and 303 Gallery, New York
"#Youdon'townme" by Kim Gordon
When Kim Gordon graduated from art school and moved from California to New York City, she brought along a pair of canvas boots bearing the distinctive signature of Andy Warhol. He’d autographed them at a book signing, and rather than keep these as a collector’s item protected and preserved, she wore them. Often, they were worn on stage with Sonic Youth, the seminal no wave band Gordon co-founded. While the band established her as a musician, the boots kept her connected to her visual origins.

Those boots, along with paintings, drawing, sculpture, installation, and a new soundtrack are on display now at The Andy Warhol Museum in Kim Gordon: Lo-Fi Glamour. The exhibition’s genesis was when Gordon was contacted by Ben Harrison, curator of performing arts, to compose a score for Warhol’s Kiss, a 58-minute experimental silent film depicting multiple couples connecting. The two talked about Gordon’s visual artwork, and Jessica Beck, Milton Fine curator of art, joined the conversation. Eventually the project evolved into a co-curated, full-scale exhibition.

Most of the collection is occupied by the “Noise Painting” series, stark white canvases vibrating with the names of groups dedicated to sound: booming, big, chaotic, messy, and dripping with thick, black paint. They’re bold, crude, and dangerous, like graffiti blasted onto public buildings. They intend not just to claim space, but to damage it with defiant brashness. 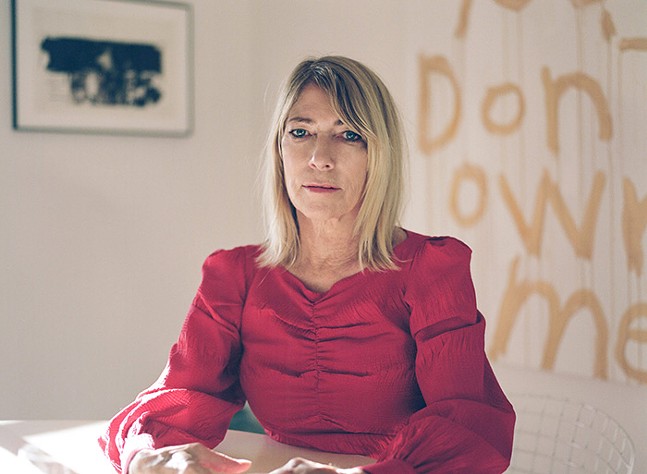 Photo: David Black
Kim Gordon
This treatment was revisited in 2017 with the Hashtag series, gritty black paint replaced with gold glitter and handles subbed with slogans “#PussyGrabsBack,” “#Thisisillegal,” “Youdon’townme,” and, simply, “#”. At first glance they can be read as a show of support for the #MeToo movement and the women speaking up and out, but it’s much more complex than that. The series examines the reduction of uprising into bite-sized catchphrases, easily digested or regurgitated, packaged for easy distribution. The guts remain below the surface, beneath first sight, prompting us not to be satisfied with the quick encapsulation, but to delve deeper.

A trio of sculptures from “The Pitch” series rest on cocktail-sized tables, doll-sized women sprawling in delicate pleasure. The installation work “Black Glitter Circle” arcs into itself like disco gunpowder bound for self-combustion, while “Gold Rush” gilds Plexiglas panels and mounts them with hinges causing a sensation of impermanence and instability.

The exhibit's main attraction, Kiss and its soundtrack, immerses the viewer in sound and image. Gordon, with Bill Nace, Steve Gunn, and John Truscinski, provides a wave on which to float down the river of the film; sometimes delicate, often dreamy, never intrusive, and always enriching. Kiss is not titillating — the contact is not so clinically presented to seem orchestrated or over-directed, but it isn’t enticing or overtly sexualized. In truth, it’s exactly what one would expect Warhol’s handling of couples meeting at the mouth for an hour would be, music imbuing it with a lush richness that soars.

Sound for Andy Warhol's Kiss
The score for Kiss was recorded in The Warhol’s theater over a two-day stretch in summer of 2018. During this visit, Gordon met with Beck to not only discuss her existing works for inclusion, but prompt new explorations to debut, resulting in the Airbnb series.

These new works live and breathe as natural extensions of Gordon's previous works, absorbing elements of earlier series and carrying them forward. The primal quality of the noise band and hashtag cycles continue; lines remain rough, vital, vibrant, now shaped but not softened. All feature a female form, nude, caught in a process rather than a pose. No faces can be seen. Most begin at the shoulder and one or two extend upwards in a glimpse of the plane of a chin or curve of a mouth, but that’s as far as it goes, leaving only our gaze. Although these torsos are framed as if by windows, the feeling for the viewer is not one of peeping into secret spaces. Instead, we catch sight as an accidental observer of women who exist not for us, or in spite of us, but free of us. What we think is of no consequence. The women in these works may be without clothing, but they move through space confident that the mantle of their autonomy rests securely upon their shoulders.

The Warhol has commissioned works of music before and has worked with artists to develop exhibitions, but this is the first time that music and art have partnered collaboratively in the work of a single artist. It’s additionally the first time that Gordon has presented a collection of work so extensive. What follows is an exploration of agency, expression, and the evolution of rebellion that thoroughly absorbs, regardless of the discipline being utilized.

Kim Gordon: Lo-Fi Glamour is on view at The Andy Warhol Museum through Sept. 1, 2019.