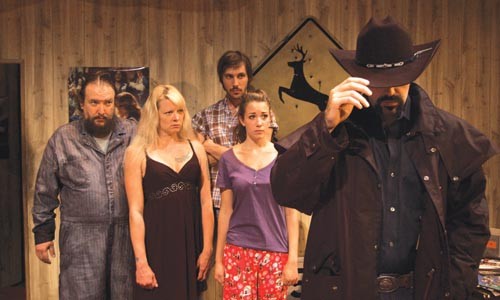 There's a whiff of classical Greek drama in Tracy Letts' 1993 Killer Joe, as his characters roil toward their inevitable -- and cathartic -- doom. But given the extreme height (depth?) of their ignobility, their plight bespeaks much more of farce than of tragedy, an interpretation that barebones productions richly exploits in the play's local premiere.

The story follows the relationship between a despicable and wildly dysfunctional trailer-trash family and the contract killer of the title. He's the highbrow of the bunch. Letts' first produced play is filled with casual nudity, graphic violence, gratuitous obscenity and inexplicable storms.

This immature mishmash has been brewed into a far more palatable concoction by barebones' artistic director, Patrick Jordan, in league with a real "killer" Joe: During most performances, as a sort of Greek chorus, local rocker Joe Grushecky fills the scene changes with live blues that not only tighten the production and continuity, but also intensify the mood. Hey, sex, drugs and rock 'n' roll. What more can we ask for?

Director Kim Martin, with the help of fight choreographer Randy Kovitz, leaves no punches -- both metaphorical and physical -- pulled in this giddily excessive show. (What was that Oscar Wilde line about nothing succeeding like excess?) It's not enough that Jordan, as the title character, is literally darker than the character's usual bland/blond cowboy portrayal. His paladin is also underlined and boldfaced with black clothes and a mass of facial hair. Jordan's stoical restraint is nicely contrasted with the in-your-face sleaze of Lissa Brennan as the over-sexed stepmom, John Gresh's appropriately repulsive weakness as the father, and John Steffenauer's aimless and vicious son.

Mirroring -- in the funhouse sense of the word -- the emotionlessness of the title character is Hayley Nielsen in the tricky part of the probably brain-damaged daughter. The too-obviously-named Dotty is sort of a cross between Tennessee Williams' fragile Laura and Shakespeare's devoted Ophelia, tossed into the middle of a John Waters movie suddenly taken over by Sam Peckinpah.

Letts is now better known for his 2008 Pulitzer Prize/Drama Desk/Tony Award-winner, August: Osage County, about a wildly dysfunctional and despicable upper-class family. Simultaneously horrifying and hilarious, this Killer Joe is far nastier -- and much less tedious.