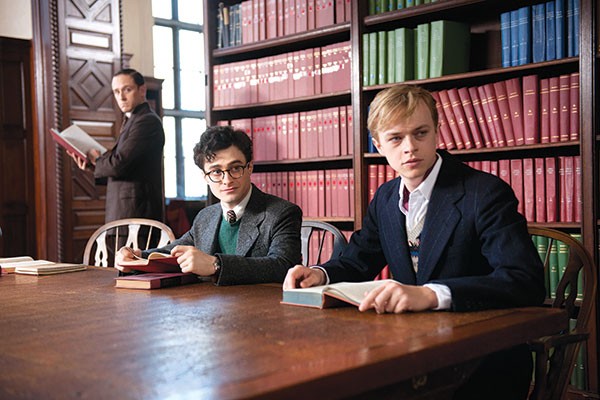 After a confusing scene set in a jail, John Krokidas' Kill Your Darlings begins in "Patterson, New Jersey 1943," where Allen Ginsberg has just been accepted to Columbia University. I hope you know who Ginsberg turned out to be, because if not, this origin story about the Beats is just a coming-of-age film about some guys who cut school and were into books. This bio-pic unfolds over one significant year during which four aspiring writers meet, formulate a plan for a new literary style, enjoy sex and drugs, and get mixed up in a killing.

Ginsberg (Daniel Radcliffe) spots the beautiful Lucien Carr (Dane DeHaan) reciting Henry Miller in the school library; later, at a Village party, he encounters William S. Burroughs (Ben Foster), flopped in a bathtub inhaling nitrous oxide. Also in attendance: the older David Kammerer (Michael C. Hall), who is in a messy co-dependent relationship with the capricious Lucien. The fourth musketeer, Jack Kerouac (Jack Huston), is introduced later, with the twin distinctions of having been in the Merchant Marine and written 1 million words.

Unless viewers bring their own knowledge to provide context, Kill doesn't make clear how this roundelay of "subversive" experiences translates into later creative output, other than tapping the persistent romanticism that wild times equal fantastic prose.

"I love complicated" is Lucien's arch refrain, and it's ironic that this tale revolving around him should feel otherwise. It's muddled, but the themes are superficial and obvious. (The montage of three penetrations — needle, penis and knife — is particularly amateurish.) And despite being structured around heartbreak and a violent death, it lacks any vivid sense of hurt, confusion or anger. The final scenes are cast as a moral dilemma for Ginsberg, testing his loyalty and how deep his rejection of authority is, but they barely cast a shadow.

Radcliffe is moving into edgier adult roles, though it's hard not to see Harry Potter in this tale of a bespectacled lad, smart but unschooled-in-the-ways-of-weird, who finds both conflict and a new sense of purpose at an esteemed educational institution. The fine-boned, dewy Radcliffe is also poorly cast as the less attractive young Ginsberg. (It's a distinction that matters when the work pivots on the hierarchies of male beauty.)

The film wraps up with a series of snapshots of the real Ginsberg and company, from Columbia through the Morocco sojourn and into the AARP years. Perhaps the final unintentional irony comes at the very end of the credits: "Photos of Allen Ginsberg courtesy of Allen Ginsberg LLC."From gleefully smashing the system to being a post-mortem LLC — a full life is indeed complicated, though only a sliver is presented here.