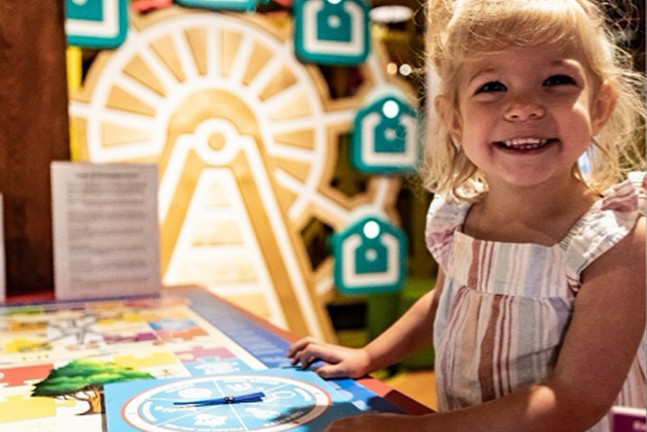 Photo: Courtesy of Heinz History Center
Heinz History Center
From the affirming lessons taught in Mr. Roger’s Neighborhood, shot at the local WQED Studio, to the pioneering work of puppeteer Margo Lovelace, whose marionette theater in Shadyside was one of the first of its kind, Pittsburgh has children’s education in its roots. This October, in the tradition of this legacy, kids can learn more about their city for free.

The Heinz History Center and on-site Western Pennsylvania Sports Museum will offer free admission to anyone under the age of 17 for the month of October. The offer is also applicable at the Center's supporting museums and historic sites, including Fort Pitt Museum in Point State Park and Meadowcroft Rockshelter and Historic Village in Avella, Pa.

Brady Smith, the Center’s director of marketing and communications, says families will now have easier access to learning experiences.

“By offering free admission for kids, the Heinz History Center is able to make our museums more accessible to families in October,” Smith tells Pittsburgh City Paper via email. “The History Center’s family of museums inspire lifelong learning and provide a safe, fun, and educational experience for kids and adults alike.”

In a statement, the Center credits a partnership with UPMC for making the free admission program possible.

The Heinz History Center has several attractions geared toward children, including the Mr. Roger’s Neighborhood exhibit, which displays the original sets and puppets from Fred Rogers' show, and the interactive Discovery Place, where kids can design pop art like the Pittsburgh-born artist Andy Warhol, construct bridges, and more. Other highlights include Pittsburgh: A Tradition of Innovation, where visitors can see the city's contributions to medicine, space exploration, technology, and more.

For Steelers fans, the Western Pennsylvania Sports Museum details the history behind the team’s six Super Bowl championships, as well as the lesser-known stories of Pittsburgh’s Negro League Baseball leagues. On Oct. 6, the sports museum will also screen a documentary on one of Pittsburgh’s most famous wrestlers, Bruno Sammartino.

At the Fort Pitt Museum, children can go back to a time when Point State Park was an area of military strategy during the 1700s. The museum’s new exhibition, Guyasuta: The Life and Legend of a Seneca Chief, tells the story of the Native American leader memorialized in bronze across from George Washington in the Point of View sculpture atop Mount Washington.

Those looking for an immersive educational experience can explore Meadowcroft Rockshelter and Historic Village, located about one hour from Downtown. The historic site offers replicas of a 16th-century Monongahela Indian village, an 18th-century Frontier Trading Post, and a 19th-century village depicting rural life, as well as the Rockshelter, considered the oldest examples of human habitation in North America. On Oct. 8, the Society for Pennsylvania Archaeology will teach visitors how to identify artifacts.

Free admission will run till the end of October. Tickets for all museums can be purchased at heinzhistorycenter.org/tickets.