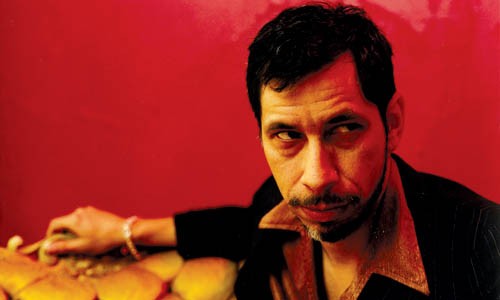 Kid Congo Powers has bailed on more cool bands than most guitarists have a prayer of joining. At 21, he left the Gun Club for the Cramps, then quit the Cramps to rejoin, establishing an off-and-on pattern with the Gun Club that persisted until the death of longtime friend and head deviant Jeffrey Lee Pierce. Later, he found himself living in Germany, adding his distinctive sense of style to several classic Nick Cave and the Bad Seeds records -- before walking out on that group, too.

"I think sometimes your work is just done," he explains, with a laugh. "And I don't care about this whole thing where you have to be a band for, like, 100 years. What's that about?"

He'd still be playing in the Gun Club, though, if such a thing were possible. Unlike the Cramps or the Bad Seeds, the band's deadly blend of rockabilly, punk and blues was partly his vision. When Pierce convinced Powers (then still known as Brian Tristan) to put the band together after they bonded over Pere Ubu, he couldn't even play an instrument. But that didn't stop the Cramps from asking him to sign on roughly one year later, just in time to play on their amazing Psychedelic Jungle.

Asked if he still thinks he made the right decision, Powers points out that it all worked out in everyone's best interests.

"The Cramps were an established band," he says. "And the new guy in the Cramps came from this band that was loved by [Cramps founders] Lux and Ivy. So the Gun Club got the stamp of approval. And then, they managed to make an absolutely amazing record." Powers isn't on that record -- the acclaimed 1981 Fire of Love -- although he did contribute to the writing, having been in the band, as he puts it, "up until 10 minutes before the recording."

While they never sold as many records as the Bad Seeds or the Cramps, the Gun Club's legend may be burning brighter now than ever. In part, it's a case of the kids being given a healthy shove in that direction by the Gun Club-loving White Stripes. But none of that would matter if the music didn't live up to the hype.

"It's like my generation and the Sonics," Powers figures. "Suddenly, you hear this, and you're just like, 'Ohmigod, what was that?' That kind of rawness and passion, it's magic. It's like when you listen to Fun House. Every time, you're just like, 'Oh my God, this is incredible. I've only heard it 10,000 times and it feels like I'm listening to it for the first time.' And I think it's just because it was a howl from deep within."

There are some constants, Powers says, between the three bands people tend to think of when they hear his name (although he's also played in Die Haut, Congo Norvell, The Knoxville Girls and roughly seven billion other projects).

"All three singers," he says, "were incredible singers that some people may say were horrible singers. All three had a very strong vision of what they wanted their music to be and a very strong vision of otherness. And there was no compromise," he says. "I was watching a Gun Club documentary and there was so much of 'Jeffrey was difficult,' 'Oh, he ruined everything.' "He was a monster.' But you know what? All of the people I've worked with are monsters. Anyone who doesn't compromise is viewed as a monster. That's something I've learned to admire and try to instill in my own approach to making music."

Powers' latest project finds him narrating, not singing, at the helm of his own band, Kid Congo and the Pink Monkey Birds. The first release, Philosophy and Underwear, is something Powers proudly calls "my own little New York album," populated by the kind of seedy characters you'd find in one of Lou Reed's better songs. And now that the record's finished, he's quit New York, his home of 10 years, for Washington, D.C., to write a book about his life.

Then, without pausing, he adds, "But I'm sure I'll be making some music as well."