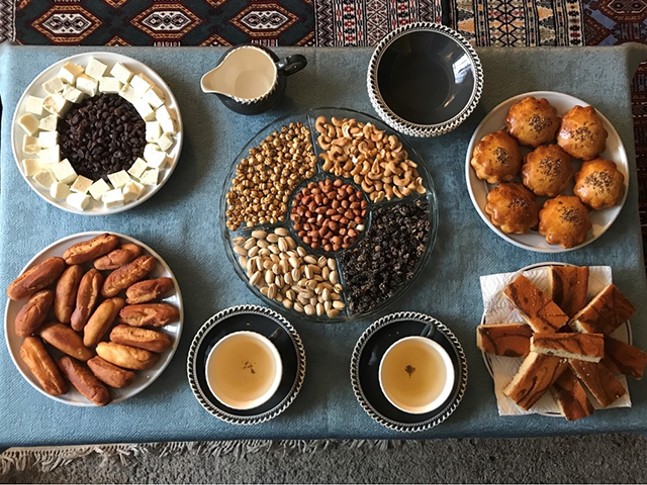 Molly Rice
A table of Afghan tea and snacks

Afghanistan is a country roughly the size of Texas, a state with a variety of landscapes, cities, people, food, and music. Afghanistan has all those things too, but most Americans think only of the country as it is on a Google Image search, a seemingly infinite scroll of war, guns, soldiers, and violence. Molly Rice, a resident artist with the Office of Public Art, is working with local Afghan refugee women to change this perception with Khūrākī, a series of four dinner/theater programs, produced by Rice’s production company, RealTime Interventions. Guests will eat food made by women whose stories are then performed by actors.

Rice spent the first half of her two-year residency working with the Northern Area Multi-Service Center (NAMS) in its Community Assistance and Refugee Resettlement program. She followed caseworkers, helped with housing setup, and assisted in facilitating a sewing group with the women refugees to help them socialize. But NAMS shut down the Refugee Resettlement portion of its programs in September 2018, citing federal policies that have reduced the number of refugees entering the city, which made running the program unsustainable.

Still, Rice went on working with the women, interacting, observing, and learning from them for a year and a half before even planning her residency project. After learning that the women were passionate about cooking and interested in starting some kind of food business, Rice, a playwright, combined their skills with her storytelling for a program that showcases both the cooking and stories of the women.

"We're really using the theatrical part to A) introduce people to the cooking and B) create an environment where they have to work on things like timing and how to follow safety guidelines in a commercial kitchen,” says Rice. The women previously only had experience cooking in home kitchens. A majority of the event’s proceeds will go toward helping the women start their own businesses.

Rice notes that while many refugees are fleeing general threats within their home country, many of the Afghan refugees come to the U.S. on a Special Immigrant Visa, which is given to those who have worked for or with the U.S. military and have received direct threats from the Taliban.

"The women, I found when I would go to their events and go to their homes, they're really still isolated," says Rice. "They're coming from an environment where they're systemically isolated." But when they started talking about food, they were "so full of confidence."

The meals in Khūrākī include classic Afghan dishes like Kofta, a type of meatball, and Bolani, a flatbread stuffed with vegetables. The April 6 show will feature Ay Khanum, a rose-shaped dumpling. Each of the four events are staged in a different neighborhood (Millvale, Highland Park, Oakland, and North Side), with a certain number of tickets set aside for residents of each neighborhood.

Accompanying the food is a performance by professional actors, written by Rice, based on the women's lives. Music by CMU grad students will accompany the meal and performance.

Since the women were not interested in performing their stories themselves, Rice held auditions and had the women pick which actors would portray them.

Tressa Glover, an actor portraying one of the women, says the audition process was emotional for everyone involved. “That callback was so much more than an audition,” says Glover. “By the end of the night, there was this bond that had formed between all of us.”

Part of the learning process for the actors involved bonding with the women, cooking with them at their homes, and trading stories about their lives. It helped create the kind of intimacy needed to step into performing as someone who is not only in the room, but cooked the food the audience is eating. It’s a fine line to tow, especially since none of the actors are Afghan.

Rice says they took as the guiding question for the series “What do you want Americans to know about you and your country?”

“They said that they felt the story had always been about war and conflict in America and they wanted to show Afghanistan as America had never seen it, and that's with all its beauty, all its culture, the music, the food, the full experience of this beautiful country,” says Rice.

Even though they aren’t performing themselves, the event is ultimately all about the women, their stories, and their food.