Four people, one murder investigation, the lobby of a Manhattan apartment building 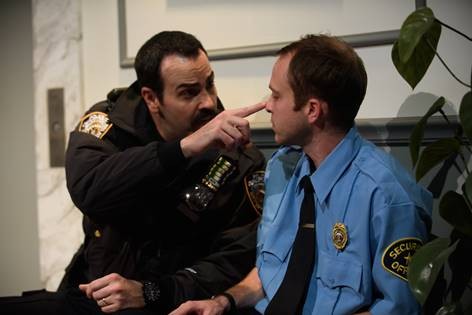 Four people, one murder investigation, the lobby of a Manhattan apartment building.

This is the premise for Lobby Hero, a play by Kenneth Lonergan. The show opened at barebones productions on September 28.

The play is a comedy, built around this murder investigation. It opens on a hapless security guard, Jeff (Gabe King) and his supervisor, William (Rico Romalus Parker).

William’s brother was arrested and accused of a crime. He is asked to corroborate the alibi, and Jeff finds himself immersed in the conflict. The plot follows these men as they struggle to make moral decisions and interact with New York City police officers Dawn (Jesse Wray Goodman) and Bill (Patrick Jordan).

Lobby Hero will be “rollicking fun,” as put by director Melissa Martin. It’s a comedy that explores moral and ethical dilemmas.

“Life, in reality, is funny,” says Parker. “When people play drama too seriously, you miss the reality.”

This is a play layered with relevant, contemporary issues, though the script was written 15 years ago. It explores power dynamics, sexual harassment, race, and the legal system. The script lives in an ethical gray area.

“The captain of security is superior to Jeff, and he’s African American,” says Martin. “There’s question of a crime that’s been committed, guilt, and innocence and representation, and how Black Americans fare in the legal system.”

Lobby Hero is split by uniform, the divide between police officer and security guard conveying a tension between authorities.

“There are power dynamics between everyone,” says Goodman. “We’re police officers, trying to protect people against security guards. Who takes power and when do they take it?”

This performance is Martin’s seventh show with barebones. She views directing as collaborative in nature. “You can’t be working in the theater and not want to collaborate,” she laughs.

Martin’s style is a perfect fit for Lobby Hero.

“[Martin] was a breath of fresh air,” says Parker. “By allowing us to discover our own challenges with the process, I found myself needing direction. She was able to guide us to a more interesting choice.”

The majority of Lobby Hero takes place in a single room. It creates an immersive and intimate experience. The play will leave the audience questioning their own sense of right and wrong.

“In society, you often have two forces against each other, right and wrong,” says Parker. “The play does a great job of giving the audience a chance to decide where the line is drawn.”

Manchester By The Sea