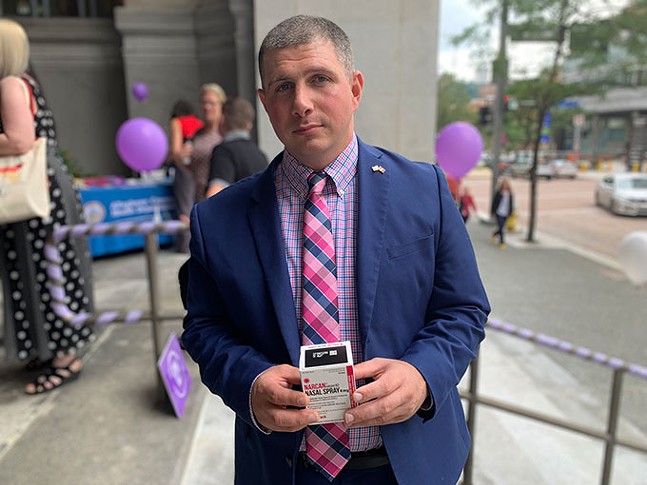 Kenneth Aquiline doesn’t remember many of the times he had to be revived from a drug overdose, but he remembers the first. He recalls waking up in 2011 at his childhood home in Penn Hills, pinned to the ground in the front yard surrounded by paramedics and police officers.

“I literally had no idea how I got there,” says Aquiline, who at the time had recently returned home after serving for several years in the U.S. Marine Corps. “My first thought was that I had blacked out and went on a rampage. ... I’m like, ‘What happened?’... And [a police officer] was like, 'You died, brother. ... You stopped breathing for a minute. We had to bring you back.’”

Had a neighbor not seen him passed out in his front doorway, he believes he almost certainly would have died.

From there, he says, things went downhill fast. He had become addicted to alcohol and prescription pain medications to deal with a variety of emotional and physical pain stemming from what he calls a “violent” childhood and injuries suffered while he was deployed in the Middle East.

When he was no longer able to access pain medication, he found heroin. He overdosed a dozen or so times, including at his workplace. Sometimes he came back with a dose of NARCAN and was able to walk away. Other times required trips to the VA hospital.

Then, in 2012, he was arrested for allegedly making terroristic threats against the police in what he says was a frustrated private Facebook message to his aunt. This was after a particularly bad time during which, among other things, he was stabbed by his brother and had to be hospitalized.

Aquiline expressed remorse for his words and says the charges were withdrawn.

These details of his life may seem surprising, considering that Aquiline now serves as an intern for Pennsylvania state Representative Sara Innamorato (D-Lawrenceville), who glowingly tweeted about him and his recovery on Aug. 27 during a harm-reduction event. He also works as the head of security at Spirit in Lawrenceville while pursuing a degree in political science at Duquesne University.

Aquiline started his journey toward recovery in early 2017, but this came after years of avoiding treatment. Though he knew his drug use was killing him, he also feared withdrawal and the prospect of sobriety.

“I literally couldn’t deal with life because I had so much trauma from growing up, to the military, to everything that happened after,” says Aquiline, adding that he suffered from post-traumatic stress disorder. “I couldn’t live one moment sober.”

After attempting suicide twice in January 2017, he finally signed himself into the VA hospital with little more than a single bag of clothes and belongings.

“I had nowhere to go,” says Aquiline. “I was homeless. I didn’t have any possessions to my name. Every day was filled with fear and anxiety and shame and guilt and depression.”

Besides the recovery program at the VA Pittsburgh Healthcare System (he still attends meetings almost five days a week at the Oakland location and H.J. Heinz campus), he attributes his recovery to his faith (a self-described Christian, he says he’s more spiritual than religious), the 12-step program, and the obligation to give back.

He now has an apartment in Wilkinsburg, where he has organized collection drives to donate clothes and toys to the neighborhood Free Store. While attending the Christ Community Fellowship church in Sarver, Pa., Aquiline volunteered for a mission to deliver feminine hygiene kits to Haiti, where he says women and girls often drop out of school because they lack access to basic necessities like menstrual pads and tampons.

He's also looking at ways to address issues that affect veterans like him, primarily homelessness and suicide. Inspired by the experience of his 2012 arrest, he has participated in talks with local police to help them better understand how to deal with veterans in crisis. He's currently organizing a symposium taking place on Sun., Sept. 29 at Duquesne University, during which he says vulnerable veterans will be able to learn about available services at the local, state, federal, and nonprofit levels.

Though the fear of relapse always looms, Aquiline says his faith and work with the community have been instrumental in keeping him sober.

“Now I have an opportunity to make it better for people who are still sick and suffering,” says Aquiline. “It really couldn’t be any better.”