I screamed with joy when I saw you emerge out of the front doors of Kelly Strayhorn Theater. How would you describe your style? Who are your style inspirations?
As a teenager, my style inspiration was Lenny Kravitz — that hair, bare midriff, those platforms! Like Prince, David Bowie, and other well-loved male artists, he pushed the boundaries of gendered style. Later in life, I learned of Sylvester, Marsha P. Johnson, Club Kids, Etta James, etc. … badasses who not only made bold choices with their looks but also with how they wore their intersectional identities. At one point, I had Etta’s signature blonde hair!

Color, shape, texture, pattern, and the politics encoded in clothing inspire me. I often think of my style as an everyday costume. It’s not about masking but rather amplifying aspects of myself in different contexts. RuPaul said, “You’re born naked and the rest is drag.” I believe this to be true. Set aside their histories, a politician’s suit and a drag queen’s get-up are put on and taken off as agents of specific types of power accessed by way of a closet. Get your drag on!

Your shirt is so amazing. During the photo shoot, someone even shared their admiration for it. Describe what you’re wearing today.
I’m wearing a bronze, emerald, and black sequin, leopard-print, button-down collar shirt. I’m not usually partial to animal print, but this glam, psychedelic take on a classic print got me. The small sequins are almost indiscernible from a distance. They give the shirt a wetlook. Sequins are a staple in my wardrobe — a simple way to be noticed in a crowd, and there is no shortage of sequin clothing in the world.

White leather boots. Bold. Beautiful. Controversial. Discuss.
Yes! These shoes remind me of the vital component of any majorette’s costume — the white boots. They are the bright cap on a shimmering, pantyhosed leg extension for the gawds. I think about the movement innovation of the Prancing J-Settes and many other southern, historically Black colleges and university majorette teams. We now call that explosive and precise movement of J-Sette and saw it in action for the world in Beyoncé’s “Single Ladies” and Homecoming performances.

What I love is that southern Black gay men adopted J-Sette movement as their own in LGTBQ+ clubs and other venues, competing in troupes adorned in rhinestoned spandex and glistening brown skin. The exchange and co-creation of a multitute of vocabularies (movement, language, fashion, etc.) between Black women, Black queer people, and the diaspora creates magic! Shout out to Jermone Donte Beacham and Jumatatu Poe for sharing J-Sette at KST many years ago and around the world today. My boots and I thank you!

More men should carry handbags. Also please discuss.
When I was growing up, my dad carried a huge leather wallet in his back right pocket that permanently reshaped all of his pants with its impression. When the wallet was in his pocket, I can’t imagine it was comfortable for him to sit. Like him, I have things I want to keep on my person when in transit, and so I carry a bag. Sometimes a clutch, sometimes a tote, sometimes a fanny pack. Just don’t call it a murse! Adding an “M” to a word that describes a product traditionally marketed to women does not make it more or less masculine. It just makes an ugly-sounding word. If it’s a purse, it’s a purse — how great! Carry on.

The clutch is handmade with Ghanian woven fabric by Rebel Bred Clothing, a Black-owned clothing line in Wilkinsburg, and it has received more compliments than I can tell you.

We talked a lot about the talent here in Pittsburgh and the Black creative community in the region. What Black fashion designers are you wearing today? Why is it important?
You now know about the clutch and where to buy it. My shirt is designed by Jerome LaMaar, a queer Bronx native who was commissioned by Macy’s as part of their Icons of Style capsule collection. His clothing is vibrant, playful, and unbothered. I recommend checking out his Macy’s line.

The black leather pants are from The Kemist Store, a London-based fashion brand by Nigerian-born creative director Sade Akinosho. It gives everything from Sunday best to streetwear. Though it’s marketed as a women’s store, like any clothing, it can be worn by whoever chooses to make it fly.

On the importance of supporting Black designers: In 2012, of Trayvon Martin’s murder, journalist Geraldo Rivera said, “The hoodie is as much responsible for Trayvon Martin’s death as George Zimmerman was.” Rivera later told Politico that it is “common sense” for minorities to avoid wearing hoodies. The hoodie is a staple of the multibillion dollar streetwear industry, a byproduct of the creation of hip hop by Black and Latinx communities. So while folks are capitalizing on the imagination and labor of Black creatives, Black people are criminalized for rocking our own cultural and economic contributions to the world. Flip the script. Support Black creativity and Black life at the source. 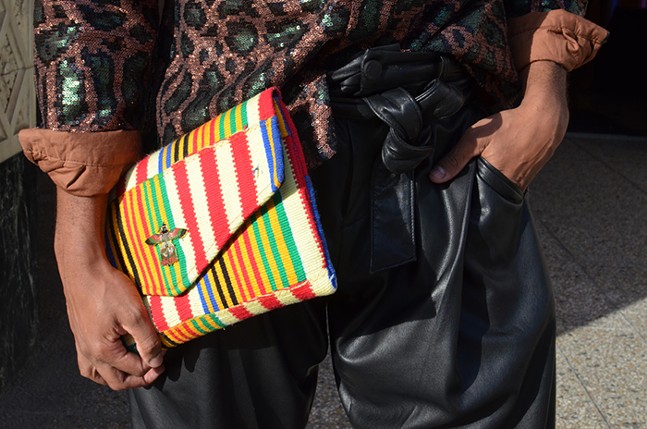 Are you wearing something that is a special gift to yourself? If so, what and why is it special to you?
Everything I’m wearing is a special gift to myself! Surprisingly, I’m not wearing anything from a thrift store. Usually I’m wearing a thrift or vintage item that I’ve picked up from Pittsburgh or around the country. One of my favorite Pittsburgh spots is Eons by the fabulous Richard Parsakian.

Kelly Strayhorn is such an important part of the cultural center and soul of Pittsburgh, what are you most excited about for the short- and long-term for KST?
I love this question, especially after considering the power of clothing as a way that folks can access and express their identity. We also do that through cultural spaces, like KST, where we create with and care for one another, and claim our right to possess and present our stories.

Something that I’m excited about that has both short- and long-term effects is the public sharing of KST’s strategic plan and vision, “Owning Our Future. Thriving Where We Live.,” that was developed by artists, patrons, stakeholders, staff, and the board of KST. It supports our new mission to be a home for creative experimentation, creative dialogue, and collective action rooted in the liberation of Black and queer people. We are carrying forth KST’s legacy that has put Pittsburgh on the map for contemporary performance and community. I’m excited to share it with folks this fall. Be sure to sign up for our email newsletter to receive the latest updates!