Perhaps nowhere in Pittsburgh do the past and the present intersect more fluidly than in the Strip District, whose current character as an open-air market and general wonderland of ethnic, imported and specialty foods derives from its history as a produce shipping hub. And produce shipping, even in the days of trains rolling down Smallman Street, meant trucks and their drivers.

Thus, the corner of Smallman and 24th streets was occupied by a repair shop and next by a quick-fare café — businesses serving first the trucks, then their drivers. As of last year, a new diner has moved in to the little corner shop, and it tweaks diner-decor clichés while paying tribute to the area' s industry. That signature diner material, chrome, is represented by shiny metal tread cleverly reinterpreted as wainscoting, and union seals instead of 45s are displayed in the vestibule alongside pictures of union members at work.

The food is mostly gimmick-free. Kelly O's — a jaunty abbreviation of the name of its owner, Kelly O' Connor — opened first in a strip mall in the North Hills, and this second location has reproduced the original menu. It' s a mash-up of local favorites (Mancini bread, haluski and kielbasa) and the full panoply of American diner standards. And for those whose palates are more Cadillac than Mack truck, there are even a couple of items that seem to have dropped in from a hotel brunch: crab Benedict and a crab-and-asparagus omelet, for example. 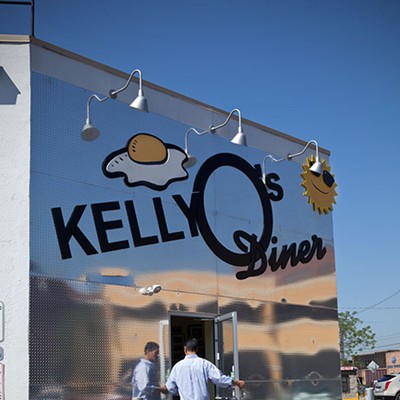 Our meal straddled breakfast and lunch, allowing us to sample sweet and savory, fork and finger foods. Blueberry pancakes were as big as dessert plates, chockfull of juicy blueberries in the center but disappointingly devoid of them at the edges, and not quite as fluffy as we like. Both scrambled and sunny-side-up eggs, however, were cooked to perfection, as was the bacon, which attained a rare and wonderful combination of crispy and chewy. A sausage-and-cheese omelet was fluffy and substantial, though a bit scant on the Swiss.

The yolks of the sunny-side-up eggs helped to moisten the hash browns, which were on the dry side. Potatoes were also offered as home fries, but Jason was happy to see the hash browns, which have become harder to find, perhaps because it' s a challenge to achieve a palatable balance between dryness and greasiness. If Kelly O' s fell on the drier end of the spectrum, at least there were plenty of crispy, brown bits. Home fries were better, both well browned and suitably moist.

Browning was an important component of the corned-beef hash, too. We were impressed that our server delayed bringing this dish out until he thought it was browned enough; in general, our service at Kelly O' s was highly competent, friendly and efficient. And in this hash of finely chopped beef and diced potato, the tasty browned bits were the best part, bearing out our server' s instincts and initiative. Also, unlike so many corned-beef hashes, its saltiness level was just right.

From the lunch side of the menu, a hamburger patty was not too big and not too flavorful on its own, but grilled onions — soft, but not melted — added appealing texture and some sweet, juicy notes to each bite.

Meatloaf came coated, practically shellacked, in gravy that was alarmingly glossy. We suspected a heavy hand with thickener, but the flavor was clean, and the meatloaf itself was wonderfully beefy-flavored. All too often, binders and seasonings get in the way of the meat flavor in this classic diner dish, but here the meat' s robustness shone through. A couple minutes on the griddle added overtones of rich char. Fries were pale, verging on undercooked, perhaps a symptom of an overworked kitchen, as it took a long time for all of our dishes to make it to the table.

Kelly O' s offers a classic diner experience, updated just enough to feel modern but not so much that it loses sight of the essential pleasures: the casual atmosphere, the polished chrome and boomerang Formica, and heaping portions of simple, satisfying food to get you through the long haul.