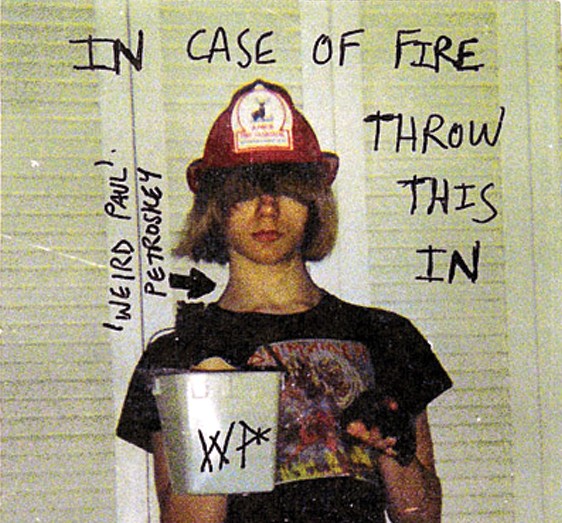 A young Weird Paul graces the cover of In Case of Fire, Throw This In

with THE CEILING STARES, MEETING OF IMPORTANT PEOPLE.

"It's not the same album I would make today," admits local lo-fi musician Weird Paul Petroskey, of his 1987 debut album In Case of Fire, Throw This In. Petroskey and his backing band, suitably titled the Weird Paul Rock Band, are celebrating the album's 25th anniversary by playing it in its entirety on Sat., June 2, at Howlers.

Petroskey cites his discovery of punk rock, as well as Dr. Demento's canon of oddball records, as influences on his earliest recorded output. While punk was newer to Petroskey when he wrote and recorded his album, his longtime exposure to pop, rock and heavy metal shines through as well. Juvenile and quirky, In Case of Fire has enough comedic value to stand up equally to Petroskey's other albums.

"Lyrically, the stuff was just coming out of my life as a senior in high school," he explains.

In addition to celebrating 25 years of releasing music, Petroskey also has a retrospective coming out on Thick Syrup Records this summer, which will include some of the "best representations" of Weird Paul's 700-song output from the past quarter-century. Thick Syrup reached out to Petroskey after being exposed to him through lo-fi pioneer Lou Barlow, whose Dinosaur Jr. and Sebadoh were on the same Homestead Records imprint as Weird Paul in the early '90s.

"One day I was on Facebook, and Lou Barlow posted one of my videos," says Petroskey. "Some people found out about me through that, including Thick Syrup. They saw the video on Lou's page and couldn't believe they didn't come across my music before."

From there, Petroskey proposed a retrospective CD to the folks behind the label, and they obliged. The retrospective will be a "good representation" of Weird Paul, including at least one song from all of Petroskey's albums, as well as two new songs on which he collaborated with Half Japanese masterminds David and Jad Fair.

Petroskey also has a new solo album in the works, along with multiple collaborations and a new Weird Paul Rock Band 7-inch.

"I try to get as many projects done as possible," says Petroskey. "Making music is what I do."