Keep it off the curb: Here's where you can sustainably recycle your Christmas tree in Pittsburgh 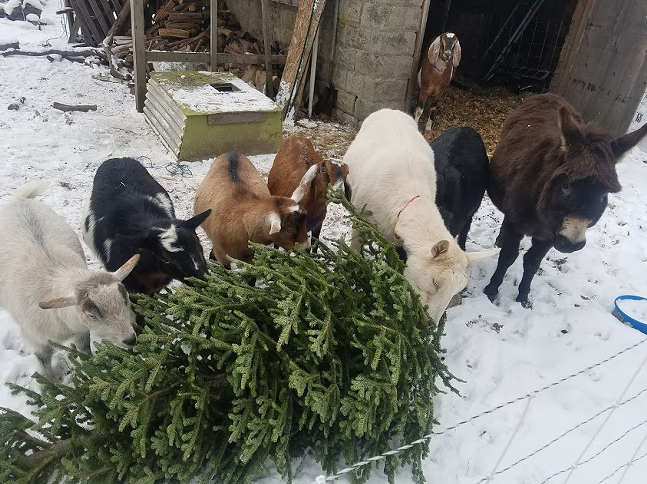 Photo: Allegheny GoatScape
Goats and their protection donkey chow down on a donated Christmas tree at Allegheny GoatScape.
For anyone who celebrates Christmas, or at least enjoys filling their house with the overwhelming scent of pine, each year brings the dreaded post-holiday tradition of taking down the tree. But instead of trashing the Douglas fir currently taking up space in your living room, try recycling it instead.

The City of Pittsburgh, in collaboration with the Forestry Division and Bureau of Environmental Services within the Department of Public Works, has expanded its Christmas Tree Recycling program by providing twelve drop-off locations for live trees. The sites are accepting trees now through January 26.

This adds two more locations to the 10 drop-off locations available last year, which the city claims collected more than 21 tons of trees.

Residents can find drop-off locations through an online map on the Department of Public Works website (see link above). Most locations are accessible 24 hours a day except for the ones in Hazelwood, Homewood West, and Elliott, which are open from 8 a.m.-1 p.m. Monday through Saturday.

CP photo: Abbie Adams
Christmas tree recycling drop-off under the Birmingham Bridge in the South Side.
A press release says the program aligns with the zero-waste goals outlined in the city's Climate Action Plan by allowing residents to recycle their trees rather than place them on the curb, where they would be picked up and taken to a landfill. As a bonus, any trees collected at designated drop-off sites will be chipped into free pine mulch that residents can pick up this spring and use for gardens, lawns, and other outdoor projects.

Another, arguably cuter way to recycle your tree is by donating it to animals as food or other purposes. Jill Argall, director of the Humane Animal Rescue Wildlife Rehabilitation Center, says they use old Christmas trees as “enrichment and cage furniture” for their rehabilitating wildlife rescues, including owls and raccoons.

However, she adds that people should call ahead to ensure the center has room for the donation, as they have very limited storage. (See below for a video of a raccoon enjoying a donated tree at the Humane Animal Rescue Wildlife Rehabilitation Center.)

Happy #freedomfriday folks! I hope you’re enjoying the nice weather like this raccoon! This guy has been here all winter because he was too young to be released before it got cold! Hopefully Spring is right around the corner and this guy can be released soon! #procyonlotor #raccoon #pghanimalswin #behumane #harsaveslives

Donated trees also provide a grazing option for landscaping goats and their protection donkeys in the offseason when they’re not clearing lawns or parks. Gavin Deming, founder and executive director of the North Side-based Allegheny GoatScape, says they accept old Christmas trees as long as they, as he puts it, "are not completely bone dry” or have preservatives on them. (As stated by the nonprofit National Capital Poison Center, both commercial and homemade Christmas tree preservatives, which are usually added to water in tree stands, often contain ingredients that are toxic to animals.)

Anyone interested in donating a tree to Allegheny GoatScape can contact Deming at gavin@alleghenygoatscape.org for more information.

No matter how you decide to recycle your tree, make sure to remove all decorations, including ornaments, lights, and tinsel, as well as tree stands and skirts.