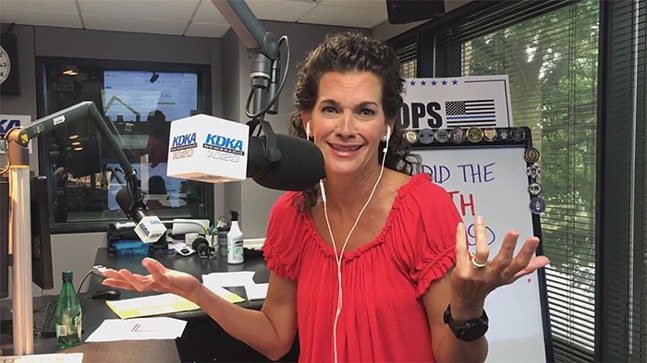 Screenshot of Wendy Bell's show on Facebook
Controversial radio host Wendy Bell has been taken off the air at KDKA Radio, "until further notice," according to a statement from the station. The change comes after a clip went viral this week of Bell advocating on air for park rangers to shoot protesters, comments she made during a June 26 episode of her show.

"We take very seriously our responsibility to provide a platform for our communities to engage in diverse and meaningful dialogue, debate and the right to freedom of speech, we do not condone the incitement of violence on any of our platforms," KDKA Radio said in its statement.

Bell's show is no longer listed on KDKA's website, and her author page on the site no longer exists. The statement from Entercom, KDKA's parent company, does not state if or when Bell will return to air.

Bell has caused controversy many times during her stint at KDKA Radio, but the clip that went viral this week included advocating for gun violence.

At least one advertiser, BreadWorks Bakery, pulled its ads after Bell's statements. "We were shocked and saddened by her comments,” reads a Sept. 3 Facebook post from the bakery. “BreadWorks does not condone violence. This is why we will not be advertising on her show any longer.”

Earlier this week, KDKA-TV issued a statement reminding people that Bell doesn't work for the station, as many people sent complaints about her to KDKA-TV. (KDKA Radio is owned by Entercom, while KDKA-TV is owned by VIacomCBS.)

In 2016, Bell was fired from her longtime post as a news anchor at WTAE after a Facebook post she wrote in response to a shooting in Wilkinsburg that killed five people. Bell described the alleged shooters with unsubstantiated and racist assumptions about their identities, writing that "They are young black men, likely teens or in their early 20s. They have multiple siblings from multiple fathers and their mothers work multiple jobs."

Since April, KDKA Radio 1020 AM has dropped three spots in the Pittsburgh-area ratings and was the 5th most listened to station in the region in August, just narrowly beating out WESA 90.5 FM.

This is a breaking story and will be updated with new information as it becomes available.