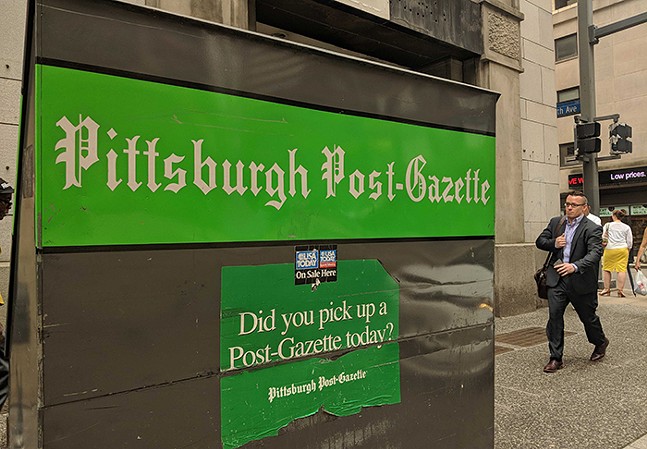 CP photo: Lisa Cunningham
Pittsburgh Post-Gazette stand in Downtown Pittsburgh
According to an email obtained by Pittsburgh City Paper, Karen Kane is no longer the managing editor of the Pittsburgh Post-Gazette. Newly appointed executive editor Stan Wischnowski announced today that Kane’s new role will be on the editorial side of the paper as Deputy Editorial Director. She will work under Keith Burris, who recently vacated the executive editor role at the paper when he was replaced by Wischnowski. Burris now serves as vice president and editorial director of Block Communications, which owns the Post-Gazette.

"Since taking over as managing editor earlier this year, Karen has made many contributions to the daily news report and managing newsroom operations," wrote Wischnowski in an email sent to all Post-Gazette staffers today. "After joining the editorial board in 2019, she wrote a series of high impact op-ed columns, some that garnered state and regional awards. “In her new role, she will work closely with Keith Burris to provide strong opinion leadership for the PG."

The email says the paper will be conducting a national search for a new managing editor.

Kane was named managing editor in January, but came under criticism after P-G management barred journalists Alexis Johnson and Michael Santiago, who are both Black, from covering the ongoing Black Lives Matter demonstrations. Santiago left the paper in June.

In June, NewsGuild-CWA president Jon Schleuss called for Burris and Kane to resign following that controversy. NewsGuild-CWA is the parent union of The Newspaper Guild of Pittsburgh, the union that represents the 120 journalists at the Post-Gazette.

“I have watched with disgust as top managers at the Pittsburgh Post-Gazette continue to fight their journalists and the Newspaper Guild of Pittsburgh,” wrote Jon Schleuss in a June statement. “Executive Editor Keith Burris and Managing Editor Karen Kane have shown outrageous insensitivity in directing coverage of protests of racism and police brutality, dismissed criticism from within their own newsroom and dehumanized their staff. They must resign immediately.”

The Newspaper Guild of Pittsburgh recently voted to authorize a strike, and the NewsGuild-CWA executive council endorsed the strike. However, any strike still decision awaits the vote from CWA Executive Board and the signature of CWA president Chris Shelton.

Guild president and P-G reporter Mike Fuoco declined to comment for this story. Burris still oversees the opinion departments of the P-G and the Toledo Blade, both of which are owned by Block Communications. Toledo News Guild vice president Jay Skebba said today on Twitter that Kane’s move, as well as Burris’ recent move, should be considered demotions.


No matter how anyone tries to spin in, Keith Burris and Karen Kane have been demoted, and with good reason. Neither are fit to lead a newsroom. https://t.co/t1mDCudlvX

In June, Wischnowski resigned as the top editor at the Philadelphia Inquirer after controversy around a headline on a column about the impact of civil unrest and property damage after the police killing of George Floyd. The now-deleted headline read “Buildings Matter, Too.”

Regardless, the Newspaper Guild of Pittsburgh was hopeful Wischnowski would be an ally of the guild, according to a press release from last week.

Diane Mastrull, an editor at the Inquirer, president of the Philadelphia NewsGuild and regional vice president of The NewsGuild said in last week’s press release that Wischnowski “used to express disgust over what was happening in the Post-Gazette newsroom. Now’s his chance to do something about it.”