“This is such a good spot. The customer base is here. The community is really great.” 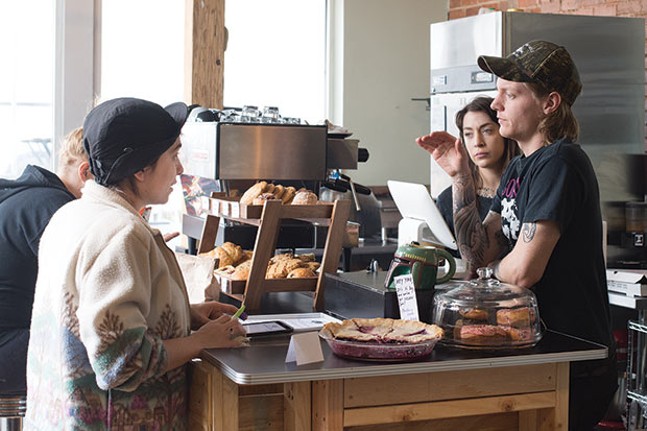 Lili Cafe was long the touchpoint for punks in Polish Hill. The cafe shared a building with Cruel Noise Records and The Copacetic Comics Company, making up a nerdy, punk trifecta.

A few months ago, when Lili’s owner, Heidi Tucker, decided she wanted to close her business, she asked one of her employees, Chris Laffoon, if he would be interested in the spot. Laffoon was already taking steps to open a coffee truck, but changed course to set up shop in the space. “This is such a good spot. The customer base is here. The community is really great. The location in general is perfect,” says Laffoon. On March 4, two weeks after it had closed as Lili, the shop was reopened as Kaibur Coffee and Cafe.

Laffoon, who has a blue lightsaber tattoo gracing one middle finger, named the shop after the kyber crystals the Sith and Jedi use to construct lightsabers, in Star Wars. “I have a lot more Star Wars stuff,” he says, smiling, “but I just sprinkle it in where I can. It can’t be too much. Although, I never think there’s too much.”

The space is clean, modern and bright. “Now that the windows are more open, it feels a lot bigger,” says Laffoon. He also added a bar with a few stools and expanded the kitchen. “Lili was always the ‘day bar’ of Polish Hill,” says MJ Flott, who runs the pastry program for the cafe. “Now that we have this countertop, it can truly be the day bar.”

Flott, who has been making vegan pastries under the name Wolf Teeth Donuts for about a year, was also a former Lili employee. They and Frankie Mulheran, another Lili employee, were asked to stay on and run the kitchen for Kaibur. The expanded kitchen helped the staff develop new recipe ideas and test them. Flott and Mulheran have kept some Lili classics, like the Moonstruck, an egg-in-a-hole with cheddar cheese, avocado and spicy vegenaise.

“[The customers] know the menu and the coffee. It’s just been updated,” says Laffoon. “I’m just trying to bring new stuff in the same location. We want to keep the same community feel, but with my spin on it.” The menu is almost entirely vegetarian, with many vegan and gluten-free options. Kaibur gets its coffee from Elixr, in Philadelphia, and it pairs nicely with the vegan donuts, pie, cinnamon rolls and other treats that Flott dreams up.