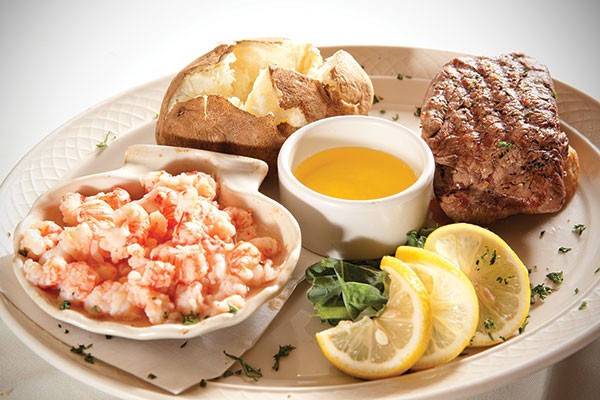 All too often, Jason is disappointed when visiting steakhouses that remind him of the restaurant meals of his childhood. These meat-and-potatoes dinners don't live up to current levels of culinary sophistication, or even the expectations of decades past. But any trepidation was unfounded at J.W. Hall's, an old-fashioned, family-style steakhouse in Hopewell Township. Not only was the ambience satisfying — its stained woodwork and paintings of European idylls a step up from diner decor without being formal — but the preparations happily lived up to  childhood memories, too.

Hall's location in a strip mall belies its 30-year history. The current owners, Hopewell natives Jeff and Johnene Belsky, purchased it in 2011. While the vibe is casual, it's clear that Hall's aspires to be a go-to place for event dining; indeed, three generations were having a birthday dinner out at a table nearby.

The menu's emphasis on steak and seafood rises to special occasions, while plenty of pasta dishes, sandwiches and pub-style appetizers accommodate regulars. Most of the menu would have been familiar when the restaurant opened, but nonetheless delivers options for today's much more discerning diners. Thus the salad bar, while including such chestnuts as canned black olives and bacon bits, also features baby spinach and grape tomatoes, not to mention the remarkable addition of a large wedge of good, sharp cheddar cheese.

Another steakhouse staple, the warm loaf of bread served whole on a cutting board with breadknife, is available in white or wheat. Our wheat loaf, though a bit lacking in crustiness, was flavorful and hearty.

For those who forego the salad bar, one option is spinach salad with warm bacon dressing. Many restaurants serve this dressing sweet, but Hall's was more savory, and without the viscous texture that can ooze overwhelmingly over tender greens. Unfortunately it was also without big bacon flavor. Sliced button mushrooms didn't add much in compensation.

A winning appetizer was shrimp and scallops, broiled in butter and available with Cajun, citrus or, our choice, creamy Dijon seasoning. This was good enough that, once the seafood was gone, Jason eagerly sunk some of the bread into the sauce. The modest-sized sea scallops were cooked well enough, but it was the plump, firm shrimp that stood out, and the Dijon seasoning delivered zing through the richness of the cream.

This boded well for seafood in our entrees. In what we're guessing to be the biggest departure from the old Hall's menu, the seafood offerings extend well beyond shellfish to include a number of finfish in preparations that, if not precisely up to the minute, at least don't scream that they're dated. Jason couldn't resist the menu's two signature items, paired: prime rib and "lobster kettle," langostinos served in a miniature bucket with drawn butter on the side. The prime rib was flawless, surrounded by flavorful, well-seasoned jus, while the little langostinos delivered on their promise of lobster-like sweetness and tenderness. They were as addictive as popcorn.

Crabmeat Devonshire was less impressive. A Pittsburgh invention, Devonshire is a variation on the open-face sandwich consisting of mild, shredded meat (turkey is classic) and salty, smoky bacon layered with a creamy, cheesy sauce on toast. The substitution of crabmeat took the recipe up a notch, but the crab still included little shards of shell, and was nearly drowned in gooey sauce.

A burger was juicy despite being cooked beyond our requested medium rare, and the faintly hearty bun was appropriate to an upscale eatery, even if the lettuce was pale iceberg (not romaine) and the onion slice harsh yellow (not bright red). As a side, we had the choice of fries or "quarter fries," quartered potatoes that were less like steak fries and more like sections of baked potato. They were a bit underseasoned, and poorly partnered with ketchup; baked-potato-style accompaniments would have perfectly complemented their character.

The fries served alongside our broiled chicken were crispy and fluffy, with that textured surface that has been in vogue lately, while the poultry itself was masterful. Superbly juicy white meat suggested a marinade (or perhaps baste) that stood in for a sauce without drowning the flesh, and char marks offered grace notes of smokiness and occasional crisp. 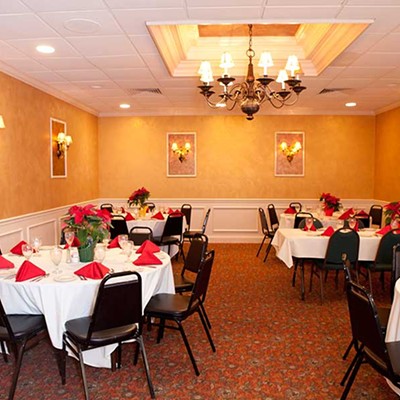 Finally, a house-made decadence of peanut-butter fudge in a chocolate crumb crust with hot-fudge topping had a silken texture, fully flavored yet remarkably light. It was a perfect conclusion to a meal that should satisfy anyone open to the classic American surf-and-turf tradition, raised to the level of execution that most of us now demand.