"We were so passionate about what we were doing, and we really believed that we were just right about everything we did."

Justin Sane is the founding singer and guitarist of Anti-Flag. The Pittsburgh-based political punk band is now older than many of its fans, and is celebrating its 20th anniversary with a tour featuring songs from all of its records. He spoke with us at the band's Glenshaw studio.

You grew up right near here, right?

I grew up on the wrong side of the tracks in Shaler. [Drummer Pat Thetic] grew up two or three miles up the highway, and we met in under-9 soccer. And that was the beginning of Anti-Flag! We were two misfit kids in Shaler. In 1990, when I'd wait up at the top of the hill to get the bus into town, I was a kid with a mohawk and I couldn't be up there for more than two minutes without someone driving by and yelling "Faggot!" or dudes stopping to beat me up.

What was the impetus for starting the band?

What was the climate like for a political band in Pittsburgh at that time, the early- to mid-'90s?

How did you end up getting your first full-length, Die for the Government, on New Red Archives, out of San Francisco? 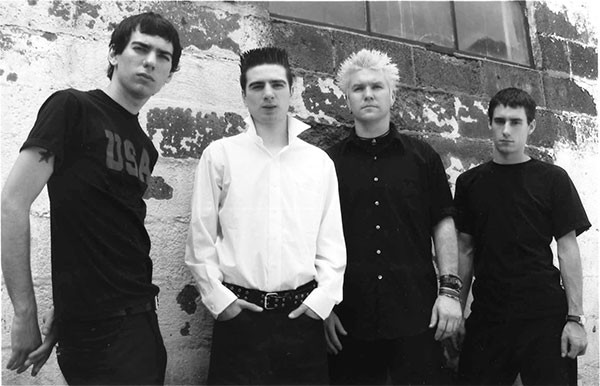 Anti-Flag around the time Underground Network was released in 2001

New Red Archives was run by Nicky Garratt, who played guitar in the UK Subs. We met Nicky in Erie through a guy who had a radio show, he was called "The Old Man." He put us in touch with Nicky and said, "You should really work with this guy!"

We were obnoxious. We didn't even know it. But we were so passionate about what we were doing, and we really believed that we were just right about everything we did. We were those kids. And I look back on it now, like, "Oh man, no wonder people wanted to kill us." But in retrospect, that flamboyance and that belief in what you're doing — those are the things that make people notice a band.

At that point, you were still a three-piece, with Andy Flag instead of Chris Head and Chris #2.

Andy was still playing bass at that point. Andy quit right before Die for the Government came out. We'd done a couple of tours that were a couple of weeks. And touring is a whole other world, especially when you're young, and your personalities, the conflicts, they're driven to the tempest-in-a-teacup level. We were just young and immature, we didn't get along, and he quit.

As you started playing bigger clubs, did you feel some cognitive dissonance?

The minute we did a record with New Red Archives, because New Red Archives had real distribution, we got labeled a sellout right in our own scene. I think part of it was jealousy, but part of it was that people really believed it. And I understand it, because I'd been that kid. Even to this day, when kids give us shit over things, I understand where that kid's coming from.

We always had that conversation: Is this in line with what we set out to do? Is this in keeping with our value system? Because ultimately, yeah, we wanted to play in basements and whatnot, but I think our goal was always to play to as many ears as we could, to spread the ideas we had, which I think at the time were ideas people weren't hearing. To be called Anti-Flag, just on its own, there was something that turned heads. And immediately there was, "Do you hate America?" The dialogue would start right away.

If you're playing to a few thousand kids, how many are really engaged with your ideas, how many minds have you changed?

It's ebbed and flowed. Doing this tour, the 20th-anniversary shows, there are people coming out who haven't been to a show in 10 years, and they're lawyers with the ACLU, they're environmental lawyers. The theme from all of them is, "I do the work I do because of your band." I can't believe the band was able to have that kind of an impact.