Exploring the mysteries of a red fruit syrup 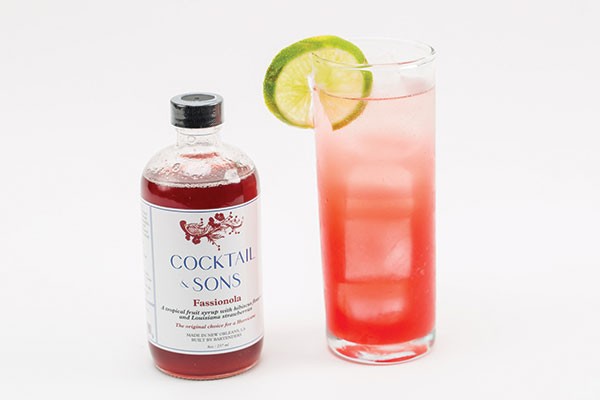 For booze enthusiasts who enjoy poring over recipes in old cocktail books or tinkering in their kitchens, obscure ingredients are alluring. John Pyles, a guest bartender at Maggie’s Farm Rum Distillery, is one such tinkerer. Over the years, Pyles has made appearances behind the bars of the now-closed Embury, the re-branded Harvard & Highland, and Tender, all establishments known for delving into forgotten or classic ingredients. Each time we crossed paths, he was working on something new. During our most recent run-in, over daiquiris, the ingredient du jour was fassionola.

Fassionola is a red fruit syrup added to cocktails. The history and specifics of fassionola, however, are somewhat murky. According to Amy McCarthy’s 2015 article in Eater, it is thought have been popularized in the 1930s by tiki-cocktail king Don the Beachcomber, a.k.a. Donn Beach. He was notoriously secretive about his ingredients, going so far as to pre-batch mixes into coded label bottles to protect recipes from rival bar-owners. Many of Beach’s mixes have now been deconstructed by Jeff “Beachbum” Berry and others, but his recipe for fassionola is lost to time. Some theorize that it may have simply been pog juice, a Hawaiian blend of passion fruit, orange and guava juices. According to Pyles, contemporary recreations often rely heavily on berry and passion-fruit flavors, while others try to hack the recipe using Hawaiian punch, or grenadine and raspberry jam. His own blend uses passion fruit, pineapple, strawberry, raspberry, lime and grenadine. I took to the dark corners of the internet to see what other tiki enthusiasts reported using, and the answers came back overwhelmingly weighted toward passion fruit.

Fassionola hasn’t been available widely for commercial sale since the ’80s. Pyles directed me to Cocktail & Sons, a company based in New Orleans that had a limited-release, commercial version of fassionola last April. According to its website, this “blend of Louisiana strawberries, fresh-cut pineapple and mango, passion fruit, hibiscus and lime” was available only until June, with “the limited availability based on Louisiana strawberry fields.” Max Messier, co-founder of Cocktail & Sons, is dedicated to using only Louisiana strawberries and is working with the farmer to plant enough for a re-release next spring. Pyles, however, had bought two bottles, one for himself and one for Adam Henry, co-owner of Squirrel Hill’s Hidden Harbor. The purchase began his exploration in making his own recipe. Henry also developed a version previously. On its menu, there is a Fassionola Fizz, made from gin, lemon, fassionola, egg white, cream, seltzer and orange flower water, as well as the Rum Barrell made with the syrup. Two more are in the works.

While craft-cocktailing grows and an interest in housemade ingredients continues, these lost recipes are seeing a resurgence in Pittsburgh and beyond. In fact, in a few weeks we’ll have the details on a new project that harnesses this same idea.