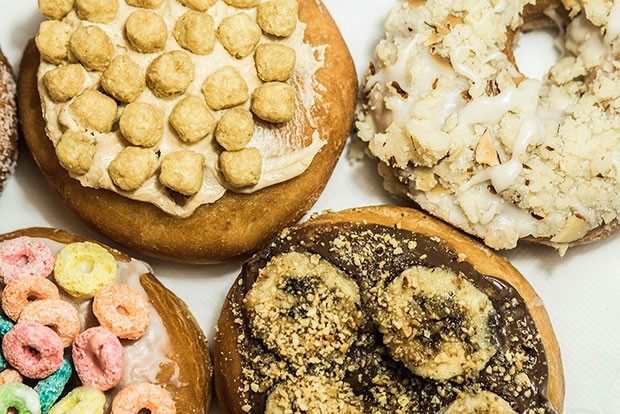 The take-out joint specializes in British Isles cuisine, but the idea to make donuts came from several inspirations. One was a random night of deep-frying cinnamon buns, leading the team to think, “Let’s just make donuts.” Another was Heisler, who has Polish roots, wanting to honor paczki, a traditional fried-dough pastry. And lastly, there was the hope of recreating those Bethel Park Kmart donuts from Heisler’s youth.

But Just Good Donuts’ products are far from the generic deep-fried offerings of a big-box store — these donuts have pizzazz, with a lively selection of flavored toppings.

Heisler says the most popular variety is the maple and vindaloo-spiced-bacon donut. Other creative toppings include: Nutella with caramelized banana, root beer float, “Clark Bar” and molasses with ginger snaps.

While these toppings have gotten wilder since summer, Heisler says that it’s the quality of the basic donut base that must stay consistent. “As long as I start with a good donut, anything I put on will be good, too.”

Just Good Donuts sells its creations from 6 a.m. until they’re gone (usually between 1 and 2 p.m., according to Heisler), and is open seven days a week. The shop takes pre-orders and will even make a themed platter for weddings. (Wedding donuts are a thing now; watch out, cookie table!) And don’t worry about breaking the bank for fancy donuts. A simply styled donut is just $1, and the fancier ones are $1.50-2; there is a discount on orders of a dozen.

“I priced them that way because they are donuts,” says Heisler. “They are not going to clean your house. There’s no reason to pay $24 for a half-dozen donuts.”

Where to get the best free, special donuts today for National Doughnut Day