One of the tough lessons of Pogopalooza 6, held last week, is that as fun as it might sound, it's not easy to be a competitive pogo-stick athlete.

Let's start with the price: A basic Flybar 800, the most popular pogo-stick model, costs about $200. Safety-minded enthusiasts can also invest in a helmet (most pogoers do), and kneepads (most don't). You also need: time and a public place to practice; a perfect sense of balance; and a lithe, 120-lb. body -- which is why most of the Pogopalooza contenders were teen-age boys.

Another problem: a bunch of young folks jumping around on pogo sticks aren't always welcome.

On Aug. 21, the 20-or-so pogoers planned to hop through Downtown -- from Point State Park through Market Square and PPG Place, and then in a roundabout circle to the Roberto Clemente Bridge. Starting at 2 p.m., they expected to finish the loop in Mellon Square about two hours later.

But the pogo-stars didn't realize Market Square was gated off, owing to massive renovations of the streets and landscaping. And when they tried to perform tricks in PPG Place, security guards ordered them to leave the privately owned square. By 1:30 p.m., hopelessly behind schedule, the dejected bunch stopped by the Primanti Bros. sandwich shop to refuel.

"We're trying to find somewhere else to go," said Zach Bluett, a 20-year-old college student from Delaware. "I guess we just didn't realize the construction dates. [The route] is probably going to get modified now."

Bluett has done his share of pogoing, having grown up in York, Pa., with Nick Ryan, Pogopalooza's organizer. In his free time, Bluett shoots video of pogoers in action. What began as a hobby for the two friends has exploded into a cult sensation, thanks to improved pogo-stick technology that allows "extreme" athletes to spring four feet in the air. When Ryan, a 20-year-old sophomore at Carnegie Mellon University, began to organize Pogopalooza, Bluett planned his trip to Pittsburgh.

"I remember suggesting tricks [when we were younger]," Bluett recalls, "and people said, 'No, it'll never happen.' And now they're doing them."

Last week's Pogopalooza was the sixth annual gathering, showcasing pogo talent from around the world. Press material described the event as the "world championship of extreme pogo."

But the event suffered some bad bounces: CMU opted not to officially sponsor Pogopalooza, so the university's logo had to be scratched off, by hand, from thousands of fliers. There were also some injuries: One pogoer hurt his foot after springing over a set of stairs. Another reportedly injured himself after hitting pavement on Mount Washington.

Bluett shrugged off these inconveniences. "If this is the biggest snag for the week," he said, "then we're in pretty good shape."

Indeed, most sponsors pulled through, including a range of pogo-stick manufacturers and the Pittsburgh Parks Conservancy. And although extreme pogoers risk spine and limb to perform back-flips over sheer concrete, nearly every competitor was healthy enough to attend the "Main Event," held in Schenley Plaza last Saturday afternoon.

Shannon Ryan, a 36-year-old Florida resident, came to Pittsburgh to watch his son, Nick, perform his tricks. (Shannon's son is no relation to the Pogopalooza organizer with the same name.) Nick is 17, and his pogoing origins are humble. Nick "just started in the backyard, and elevated from there," says his father. "Met some friends online that were doing it. Mostly the stuff we're doing is at our house." Ryan seemed confident that Nick would return for Pogopalooza 7: "He seems to like it. I'm sure we'll do it again."

After three days of minor setbacks, the Main Event was held outside on a bright, sunny day. When events started at 1 p.m., around 200 spectators were already gathered on the sidewalk. Athletes posed in mid-air, shifting their legs and splaying their arms; nearly every pogoer finished by back-flipping off his stick and landing on the asphalt of Schenley Park Drive. Some dismounted off spray-painted wood platforms. Others leapt over them.

Behind the crowd, far from the experts, a gaggle of children bounced on their smaller sticks ... perhaps getting ready for Pogopalooza 16. 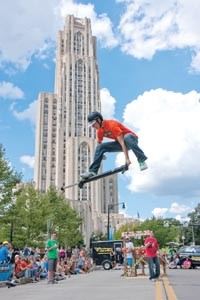 John Altdorfer
Daniel Mahoney, 16, of Truro, Nova Scotia, performs in front of the Cathedral of Learning as part of Pogopalooza 6.