The 69 pages contain a fair amount of experimentation 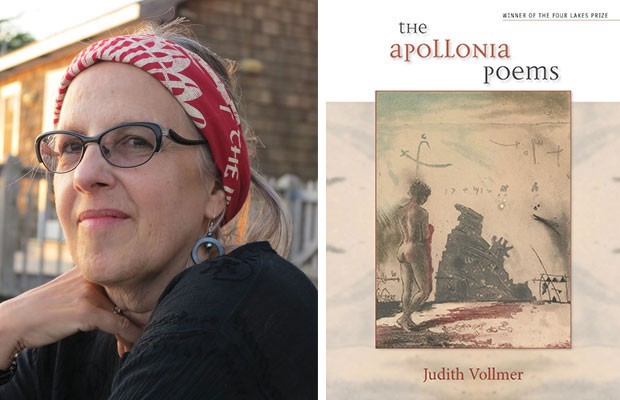 In a 2012 interview with lit mag The Fourth River, Pittsburgh-based poet Judith Vollmer speaks of her aim to write “a lyrical narrative poem that didn’t/doesn’t rely primarily on the essential infrastructure of witness, recall, plotting, or linear apprehension.”  It’s this tall task that Vollmer faces as she moves the needle with her new collection The Apollonia Poems (University of Wisconsin Press), winner of The Four Lakes Prize.

The author of the 1990 Brittingham Prize-winning Level Green, Vollmer has long been a powerful local presence. With Ed Ochester, she co-edited the long-running, now-shuttered poetry magazine 5AM, and remains a longtime professor of writing at Pitt-Greensburg. She’s also received NEA fellowships and attended prestigious residencies in Rome and elsewhere, adding to the varied settings and voices that confront readers in her newest book.

A narrative favorite, “Another Green,” shows a speaker “closing the old house” after “Skip came with his pickup & icepack / of Yuenglings to help me load last things,” the lines here showcasing a solid sense of musicality. The poem expectedly turns toward nostalgia, “a lane of mailboxes / emptied one afternoon by a small girl / … trying to read messages of strangers without / leaving the bower’s fresh green she loves more than anything.” The palpable imagery sets the stage for memories of a quirky curiosity.

The Apollonia Poems’ 69 pages also contain a fair amount of experimentation. There’s collage in “White Box Blue Lid,” interspersing lines from a William Stafford poem with first-aid checklists and fears about school shootings. Found poems like “Sentences From My Father, 1967-1970” and “In Praise of Margaret Drabble,” highlight, respectively, Vollmer’s father’s work in the nuclear field, and her unpublished interview with the British author. “The Apollonia Sequence,” a play-like conversation between Mala Babka (Little Grandmother), Granddaughter and Mother, utilizes different voices and languages; it’s sure to test readers’ patience, although the lines “Shtinkin Halloh. / Sticker Hollow — named for the thorn-bushes & hawthorns along the river! / Didn’t we call them jaggerbushes?” warmed this yinzer’s heart.

For all the well-executed heady artistry in The Apollonia Poems, it’s the more accessible work like “Crystal Bar,” where Vollmer writes, “Brown pools / flood my father’s brittle Polaroids, / I try to read them like coffee dregs, / fuel rods swollen / in water inside the reactor,” that showcases her skill with the personal while pushing the envelope elsewhere.