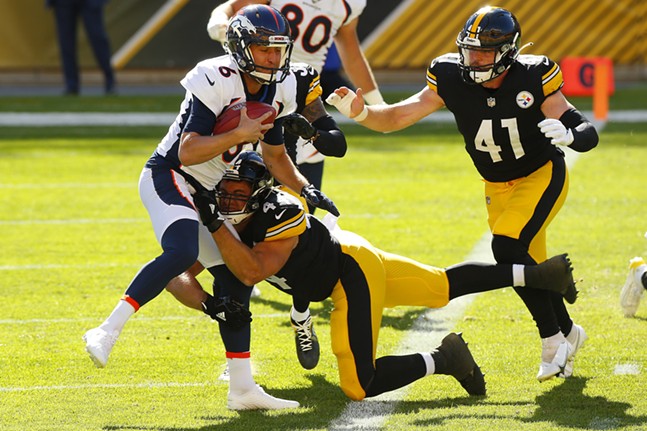 CP Photo: Jared Wickerham
Steelers played the Denver Broncos at an empty Heinz Field in September 2020.
A federal judge in Washington, D.C. granted permission for Jan. 6 insurrection defendant Thomas Fee, a native of Long Island, New York, to travel to Pittsburgh for the game between the Pittsburgh Steelers and Denver Broncos that took place at Heinz Field on Oct. 10, according to investigate reporter Scott MacFarlane of Washington, D.C.'s NBC4

Fee was charged on Jan. 16 with knowingly entering or remaining in any restricted building without lawful authority, violent entry, and disorderly conduct on the Capitol grounds. Court documents claim Fee sent a selfie and video from inside the Capitol and drove to Washington, D.C., on Jan. 5, returning the day after the insurrection, Jan. 7. Prosecutors did not oppose his travel, according to court filings.

A U.S. Diplomatic Security Service special agent contacted Fee directly over text after Fee’s girlfriend allegedly posted about his involvement on Facebook, and according to court documents, Fee admitted his participation in the insurrection via text message and sent the agent the selfie that had allegedly been taken inside the Capitol Rotunda. Fee surrendered to the FBI on Jan. 19 and pleaded not guilty on all counts Feb. 25.

Fee was released on a $100,000 bond. The former New York City firefighter, who worked for FDNY for 22 years before retiring October 2020, was ordered to avoid political gatherings, stay away from the U.S Capitol and state capitols, not make contact with any co-conspirators, and surrender his shotgun and rifle.

Absolutely absurd. One system of justice for white men in this country and another for everyone else. pic.twitter.com/8prUtpAQh2

This is not the first time a federal judge has granted a Jan. 6 defendant permission for leisure travel. In February, District Judge Trevor McFadden granted Jenny Cudd’s request to vacation in Riviera Maya, Mexico, a region with many resort towns on the Yucatan Peninsula. Cudd’s request was granted two days after Cudd was indicted on five federal counts, including one felony.

Fee returned to his Long Island home Mon., Oct. 11. Fee’s request, and his success in having it granted, has sparked commentary about how the fact that Fee is white has affected his treatment.

U.S. Capitol Police Sgt. Aquilino Gonell, an immigrant from Dominican Republic who was severely injured defending the Capitol, told MacFarlane of NBC4, “If the shoe was on the other foot … I wouldn’t be permitted to go to a football game in Pittsburgh … Plus I’m too injured to go.”