"I came to the conclusion that fracking and natural gas were really misunderstood."

About eight years ago, Wall Street Journal energy reporter Russell Gold traveled to Southwestern Pennsylvania to write one of the first major articles about the Marcellus Shale, the deep rock formation containing vast deposits of natural gas. This was before most people had heard of hydraulic fracturing, the controversial technique for extracting gas and oil from shale.

Now fracking is part of the lexicon. And this past spring, Gold published The Boom: How Fracking Ignited the American Energy Revolution and Changed the World. Despite its somewhat rah-rah title, critics have called the book thorough and even-handed.

Gold, who visits Pittsburgh for a Jan. 28 reading and Q&A at the East End Book Exchange, considers himself a reporter first. But he also has a personal angle on fracking, one he explores in The Boom: The Philadelphia native's parents and some friends of theirs ended up leasing their rural getaway in north-central Pennsylvania for drilling. They were largely swayed, he says, by the fact that their neighbors in Sullivan County were already leasing. "Whether they leased or not, there were going to be wells, there were going to be trucks, there was going to be noise all around them," he says.

Yet despite such intrusions on a landscape he'd grown up enjoying, Gold's reporting has led him somewhere many environmentalists won't like: In a world beset by greenhouse gasses, but with an apparently insatiable demand for energy, he's a conditional fan of fracked oil and gas. 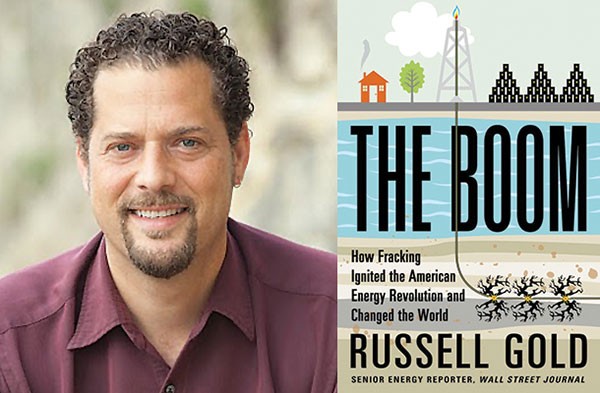 "I came to the conclusion that fracking and natural gas were really misunderstood, and that they did have a very significant and underappreciated role to play, both in building this new energy future that I think everyone wants, but also in lowering greenhouse-gas emissions and cleaning up the air," he says in a phone interview from his home office in Austin, Texas.

Officials in France, which has a moratorium on fracking, and New York state, which just banned the practice, might disagree. But here's Gold's thinking: Burning natural gas emits half the carbon of burning coal, which remains the country's single biggest source of electricity. (Natural gas also has lower emissions of soot.) And while we ultimately must cut greenhouse emissions by more than half — more like 80 percent, experts say — Gold says gas can at least supplant coal until renewable sources like wind and solar can take more of the load. "I'm one of the few people remaining who does see natural gas as a bridge fuel," Gold acknowledges.

Indeed, critics of the "bridge-fuel" approach — citing everything from fouled water wells, and toxic air emissions at gas-well sites, to earthquakes caused by underground storage of recovered frack water — argue that fracking simply can't be done safely. They add that leaks of the potent greenhouse gas methane from gas operations greatly reduce natural gas' climate advantage over coal. They group fracking, tar-sands mining and deep-water oil-drilling as increasingly risky "extreme energy" strategies. And they say that without stronger plans to conserve energy, and to quickly ramp up renewables, natural gas provides only a "bridge to nowhere" that will leave us dependent on fossil fuels even as the planet bakes.

Gold is well aware of the risks of fossil-fuel extraction; he was on the award-winning WSJ team that covered BP's monstrous 2010 Deepwater Horizon explosion and oil spill. However, he views fracking safety as mostly a regulatory and engineering challenge.

"I have not seen any evidence yet that this industry cannot be appropriately regulated — that there are problems with fracking that simply cannot be solved," he says. "The real question isn't, ‘Can we do this better?' The real question is, ‘Do we have the political will to do this better?'" He cites Colorado's new regulations to reduce methane emissions from gas infrastructure, for instance. (Last week, the White House announced its own plans to cut methane emissions.)

Gold also disagrees with the widespread belief that cheap natural gas is hindering development of renewables. In fact, he contends, the opposite is true: He says that wind and solar continue to grow rapidly — solar generation rose nearly sevenfold between 2010 and 2013 — partly because low gas prices are holding overall energy costs down. State-level mandates also play a big role in increasing use of renewables, he adds.

Despite their rapid growth, renewables remain a small slice of the country's energy budget. Some environmentalists argue for an all-out push to get off fossil fuels in a decade or so. They often point to Germany, which gets 27 percent of its energy from renewables (including hydropower), double the U.S. figure.

Gold is skeptical of faster change. "The energy system is incredibly complex and incredibly important," he says. "You have to make those changes piece by piece." As for Germany, he says, "People forget that they started that process [of embracing renewables] in the mid-'80s, after Chernobyl. Energy change just takes time."

Some might question Gold's conclusions, given the Journal's business perspective, not to mention the paper's right-wing editorial slant. But Gold says his view is that of a "realist."

"Our job is not to give a warm embrace to companies," he says. "Our job is to report what's going on out there."